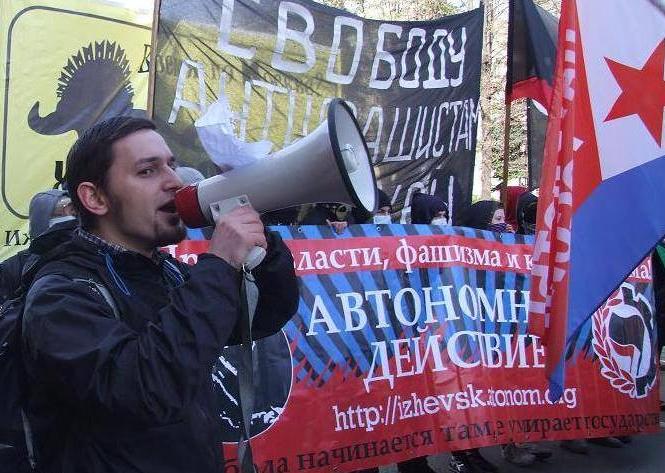 Anarchist Black Cross Moscow (ABC - Moscow) is calling for solidarity to help the anti-fascist and anarchist Oleg Serebrennikov. For more than ten years, Oleg has actively participated in the anarchist and anti-fascist movements in Russia and in Izhevsk. He has worked with the ABC – Moscow collective, and has aided detainees and arrested anti-fascists and anarchists within Izhevsk, helping them look for lawyers; he has been very vocal concerning police and state repression against anti-fascists in the city; he has also actively participated in solidarity actions in support of imprisoned anti-fascists and social activists. Due to serious problems with his health which arose after an attack by Neo-Nazis on Oleg in 2004, he is in dire need of help.

Please share the story Oleg's case within your communities, organize solidarity concerts and events, and/or even write a letter to him for support. Additionally, it is simple to transfer funds to his fund (see the bank accounts provided below)

Please read Oleg's letter below, in which he, in detail, describes his situation

«Hello, my name is Oleg Serebrennikov. I'm 33 years old and I’ve been an anti-fascist and a socialist for more than 15 years. I am one of the few people who was at the origin of the anti-fascist movement in Izhevsk.

During all that time, the Nazis and the police have been preventing me from living a normal life; there were many attacks, threats and acts of intimidation from the neo-Nazis. In addition to those actions, the local police have been trying to initiate criminal proceedings etc.

I was a member of the Russian Social Forum in 2005, I helped in organizing seminars on counter forum against the Group of Eight Summit in St. Petersburg, 2006. Between 2005-09, I organized and participated in the student union and the campaign against the privatization of education in Izhevsk. I was also actively involved in the meetings and social protests held in Izhevsk concerning the issues of housing and communal services, travel documents on public transport, point construction and other problems.

I was also actively involved in the anti-fascist struggle, carried out various anti-fascist street actions, cultural events, organized and conducted screenings of anti-fascist and socialist cinema in the student autonomous Cinema Club, blogged about Izhevsk and wrote articles about neo-Nazis in the local newspaper.

I also worked with Anarchist Black Cross Moscow, a group that has been the active online editor of the largest anarchist and anti-fascist site of the former USSR and avtonom.org

On 23 February 2004, after a protest against the war in Chechnya, some Nazis attacked me and almost killed me. There were about 20-25 people, and it ended badly for me – I was taken to hospital and diagnosed a brain contusion with hemorrhage, craniocerebral injury and a number of other problems. Unfortunately, I have not received any adequate treatment at an early stage of the illness, so, a few years later my health condition started deteriorating dramatically.

In 10 years I started having a strong health deterioration. I almost can’t work because of my need for constant treatment. Twice a year I have to get treatment in various hospitals and clinics and, generally speaking, I feel that my condition is becoming much worse.

The treatment I need to get is very expensive (2000 euro per year) and, due to my lack of funds, I can only pay a small part of the treatment. Sometimes I’ve received financial support from Anarchist Black Cross, which was very important and helpful for me. But I am now in need of assistance, without which I cannot continue my treatment. I would be very grateful if you could help me somehow.

My name is Oleg Serebrennikov; I live in Izhevsk, Russia. I am an anti-fascist and human rights activist, and a writer on social affairs. I need help because I have serious health problems due to my having been engaged in human rights and anti-fascist work in my town.

I have advised social activists and ordinary citizens on their rights and freedoms violated by the police, organized workshops focusing on how they can interact with the police offices.  I also organized various street antifascist activities (demonstrations, public protests, rallies), as well as cultural events: an anti-fascist film club, and a a socialist cinema club at the University of Izhevsk, as well as different activities related to feminism, social and environmental issues.

As a journalist, I overviewed local right-wing organizations and groups, denouncing their crimes against the citizens. I also informed people about the illegal activities of such groups.

After having started my human rights activities, I faced a problematic situation with the representatives of Ministry of Internal Affairs and neo-Nazis groups.

On 23 February 2004 after a protest against the war in Chechnya, I was attacked by some 20 neo-Nazis armed with iron rods, canes and knives. I was severely beaten, received a serious head injury and spent several hours unconscious.

Then, after having spent more than 3 months in different hospitals, the problems related to my brain injury didn’t disappear. Some neo-Nazis who participated in the attack came to “visit” me in a hospital several times, threatening that they would kill me if I didn’t drop my investigations.

In the hospital I was diagnosed a severe brain contusion - a brain hemorrhage. One of the attackers was Jan Krasnovski – a grandson of the famous Soviet small arms designer Mikhail Kalashnikov (AK-47). His powerful relatives pressured the doctors and did everything they could to prevent me from receiving an appropriate treatment.

So, because of the poor quality of the initial treatment, my health problems became chronic. Over the past 10 years, I’ve been suffering terrible headaches, dizziness, disability of some brain functions (poor attention and memory, amnesia), weakness and fatigue. Such ordinary things like going shopping or walking are now tiresome and tedious for me. Due to the constant psychological pressure from the police and neo-Nazis (surveillance, telephone tapping, opening falsified criminal cases against me), I have severe depression.

For 10 years following the injury I’ve been treated 2-3 times a year in different hospitals and clinics of Izhevsk but my health is still seriously deteriorating. Due to the fact that I constantly have to be under treatment in hospitals and need medical care, I’m not able to have a permanent job and pay for the treatment.

In 2007 I investigated the assassination of anti-fascist activist Stanislav Korepanov committed by neo-Nazis in Izhevsk in the spring of 2007.

I collected data and photos of Nazi attackers and then, with the help of lawyers, I passed this information to the investigating authorities. This data was used to arrest 2 people and aided in the prosecution of about 20 neo-Nazis. That was why the local neo-Nazis decided to call a group of their comrades from other cities to kill me. I was threatened over the phone and waited at my workplace. I reported the circumstances to the police, but they refused to deal with that. Therefore, I had to leave the city for a few months.

After that, there were some more intents to attack me, but I managed to defend myself.

In the last few years, there has been an increase in their activities: in 2010, a group of neo-Nazis tried to set fire to the apartment where my family and I live. They painted swastikas and the phrase "Oleg, you're dead" in the entrance hall of my apartment. They also shot the window of my apartment and threw some burning object to the balcony. It was by chance that no one was hurt during that attack: I could smell the fire and called the fire department.

After that, I submitted a complaint to the police and asked for them to institute proceedings against the Nazis that were trying to set fire to my apartment. The case was initiated. I recognized that the arsonists were neo-Nazis, but the police didn’t handle it properly and no one was imprisoned. The police officers gave me a hint that they were not especially interested in the investigation of that case.

In the summer of 2011 a group of neo-Nazis threw stones at the windows of my apartment. I definitely recognized a group of local neo-Nazis, but the police didn’t initiate any proceeding.

On 15 October 2012 - a group of neo-Nazis once again threw stones to my window. The window was broken, but the police only came in 2 hours, although I called them immediately. I told the police officers that I saw the man who had thrown the stones, and that he was known as a neo-Nazi activist. However, the police again did nothing.

After that, the threats from neo-Nazis continued.  Since the neo-Nazis attack in 2004, I have had to be hospitalized 2 o 3 times a year. Unfortunately, my health is constantly deteriorating, so I’m almost not able to work.

Treatment is very expensive (2000 euros a year) and my means are only enough for a small part of the treatment. I am being helped byABC-Moscow, whose aid has been very important and useful to me. But this help is not enough. I would be very grateful to you if you helped me with treatment.  If you want to ask any questions or anything to clarify, please write to e-mail avtonom46@gmail.com,

You can also transfer money for treatment via Paypal address Oleg avtonom46@gmail.com

You may donate to us to the following internet purse:

Yandex.Money Яндекс.Деньги 41001188576819 (system only works in Russian language, instructions in in http://money.yandex.ru/prepaid.xml)

Please note that currently for our Paypal account, withdrawing in euro is free of cost, but in order to withdraw dollars, they must be converted to euros with internal exchange rate of paypal which means almost 10% losses - that is a lot of money and even Western Union may be more cheap.