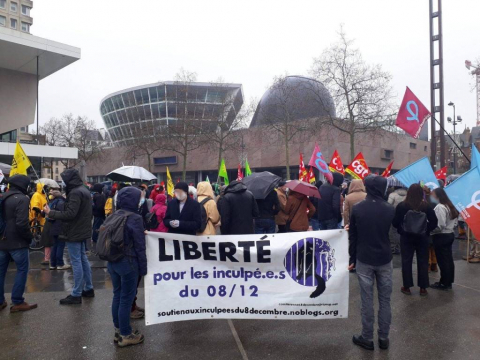 Solidarity with comrades in France: The December 8th case

On Tuesday, December 8 2020, 9 comrades were arrested by the DGSI, the French anti-terrorist police unit, across France. In Toulouse, in Dordogne, in the Paris region, in Brittany and in Rennes. Anarchists are accused of being "the criminal association planning a terrorist attack". All but one comrade were released, some after months in pre-trial detention. They are awaiting trial and are placed under the judicial control. The defendants, not all of whom know each other, have been under surveillance for a long period of time, including digital surveillance such as planting recording devices in vehicles as well as physical surveillance.
The one comrade who is still incarcerated with trial, named Libre Flot,, is under solitary confinement with limited access to visitors.. The official reason given to justify this comrade's continual detention, when all other defendants have been released, and in such conditions, is because the authorities and the court identify him as the leader of a "group". This is how they rationalize the strict conditions of his detention – to prevent a so called possible influence on other prisoners.

Earlier in February, Libre Flot’s appeal to be released and wait for trial without being held behind bars after more than a year of being in prison, was denied by a judge. Now, on February 27th, Libre Flot went on the hunger strike to protest his imprisonment. You will find his statement below the article.

In order to support anarchists who are criminally framed into the “December 8th” group, the 8/12 Committee was formed in France. Up until now, international coverage of the case is non-existing due to language barrier. Now, we need international solidarity and would like to an appeal to comrades worldwide.

What support is needed and how can you contribute?

December 8th is not an isolated case

The crackdown on the "December 8th" group is very similar to other cases of repression, that have appeared in the frame of anti-terrorist crackdown and its narrative around the world. Whether we look at the operations Pandora (Spain), Backfire (U.S.A.), Network case (Russia), Fénix (Czech republic) or Tarnac (France), we can draw similarities. The way crackdown usually happens is spectacular: unmarked vans arrive and police forces storm living spaces of different individuals. Balaclavas, automatic weapons and bullet shields are often present on the scene to make the operation look very serious and portray the arrested as highly dangerous individuals. Sometimes, such cases involve entrapment – infiltration by police agents, luring the subjects to a criminal case. After, a media boost is given to the operation – police claims successful neutralization of a terrorist cell or network, demonizes the arrested people, portrays them in a specific way. Afterwards, the case goes on for some years with little or insignificant evidence to the subject and scale of the original accusation. Comrades spend few months to more than a year of time in detention, often in very strict conditions. When the case arrives to court, the process reveals lack of evidence, holes in the investigation narrative and overall weak and unconvincing case. The case falls apart then, people are found not guilty or are given probation, or similar minor punishment - if compared to what was the impression of the scary terrorism case in the beginning.

Authorities worldwide are working on strategies of combing different radical movements, restoring their own legitimacy and becoming more efficient at repressing the elements in society that post a threat to the status quo by offering alternatives, practicing resistance and revolutionary organizing. If we want to be strong as a movement, we need to work on how we defend ourselves against repression – neutralize its effectiveness without neutralizing ourselves, as well as on how do we support comrades who are at one of the many fronts of our struggle, being held in prisons. Soldiarity means building the movement, not only in reaction to the moves of the state. When our comrades are held in prison or face any other types of repression, we must take all the emotions that it brings to us, including rage - and apply them on strategic long term organizing with the same seriousness and determination that we are feeling right now.

We can learn from these similar patterns of repression worldwide. If you are interested, read the article Taking a Global View at Repression (https://crimethinc.com/2018/08/28/taking-a-global-view-of-repression-the-prison-strike-and-the-week-of-solidarity-with-anarchist-prisoners) and the Repression Patterns in Europe brochure (https://solidarity.international/index.php/2017/07/21/on-repression-patterns-in-europe/).

Solidarity with the comrades accused in December 8th case!
Until all are free.

Libre Flot: Why I am on hunger strike

For more than 14 months I have been refuting this infamous and defamatory accusation of terrorist association.

It has been more than 14 months since the DGSI explained to me that I was not arrested for what they wanted me to believe, namely my involvement with the Kurdish forces against Islamic state (Daesh) in Rojava.

It has been more than 14 months during which time nothing validated the thesis elaborated from scratch by the DGSI, even though for at least 10 months I have been followed, traced, bugged 24 hours a day in my vehicle, my home, spied on even in my bed.

For more than 14 months I have understood that it is my political opinions and my participation in the Kurdish YPG forces in the fight against Daesh that they are trying to criminalize. It has been more than 14 months that 7 people who do not know each other are accused of being part of a criminal association.

It has been more than 14 months of answering questions from an investigating judge using the same tortuous techniques as the DGSI: manipulation, de-contextualization, omission and invention of words and facts in an attempt to influence the answers.

For more than 14 months I have been subjected to the provocations of this same investigating judge who, while I am languishing in the jails of the Republic, allows himself to tell me that this case is a waste of his time in the fight against terrorism. Worse still, he allows himself the most unacceptable insult by referring to the barbarians of the Islamic State as my "friends from Daesh". Although verbal, this remains an unfathomable act of violence. It is inadmissible that this judge grants himself the right to insult me to the highest degree, tries to smear me, and thus spits on the memory of my Kurdish, Arab, Assyrian, Turkmen, Armenian, Turkish and international friends and comrades who have fallen in the struggle against this organization. I am still outraged by this.

It has been more than 14 months of a biased investigation in which, contrary to his role, the investigating judge investigates only for the prosecution and never for the defense. He does not take into consideration anything that goes beyond the pre-established scenario and only serves to validate a fake personality shaped from A to Z by the DGSI, which far from representing me and only reflects the paranoid fantasies of this political police. Thus, I am constantly presented as a "charismatic leader" even though any non-horizontal mode of functioning is contrary to my egalitarian values.

For more than 14 months I have been held in so-called pre-trial detention without trial, under the most terrible conditions possible: the regime of isolation (see letters of March 2021 and June 2021) considered as "white torture" and inhuman or degrading treatment by several human rights bodies. It has been more than 14 months that I am buried living in a hellish and permanent solitude without having anyone to talk to, just to be able to contemplate the decay of my intellectual capacities and the degradation of my physical state and this, without having access to a psychological follow-up.

After having provided the prison administration with false arguments to ensure that I would be kept in solitary confinement, the examining magistrate requested the rejection of my request for release, as did the national anti-terrorist prosecutor. To do this, they almost copy and pasted the DGSI report of February 7, 2020, the basis of this whole affair, whose veracity has not been demonstrated and from which we do not know where the information comes. We have the right to ask ourselves what was the point of the wiretaps, surveillance, sound recordings and these two years of judicial investigation and instruction, since the facts that demonstrate the false construction of the DGSI have been concealed.

The National Anti-Terrorist Prosecutor's Office (PNAT) and the investigating judge are constantly trying to instill confusion and to create an amalgam with Islamist terrorists, even though they know full well that I fought against the Islamic State, notably during the liberation of Raqqa, where the attacks of November 13 were planned.

The investigating judge claims to be afraid that I would inform imaginary people of my situation, even though it is public, notably because the DGSI or the PNAT themselves have leaked the information from the first day. He thus claims to prevent any pressure on witnesses, victims and their families even though there are no witnesses or victims since there is no act. It is ubiquitous. He also mentioned his fear of a concerted effort between co-defendants and accomplices, even though all the co-defendants have been released, that he has not questioned anyone but me since October 2021, and that I have waited patiently until he has finished questioning me to file this request for release. It could have been comical in other circumstances to note the use of anodyne facts such as: enjoying my right to move freely in France and in Europe, my way of life, my political opinions, my sports practices, my taste for rap music or Kurdish music.

The examining magistrate attacks my mother by designating her as not being a valid guarantee for the simple reason that she did not prevent her son, who was 33 years old at the time, from joining the Kurdish forces of the YPG in the fight against Daesh. Once again, it is my participation in this conflict that is being criminalized. He also criticizes the use of encrypted applications (WhatsApp, Signal, Telegram ...) which millions of people in France are using. Finally, he denigrates all the other options of guarantees (work, accommodation...) without having anything to reproach them even though the staff of the Penitentiary integration and probation services (SPIP) whose job it is, have given a favorable opinion.

How then can we understand that after having ordered these feasibility investigations signifying the possibility of releasing me with an electronic bracelet, the judge of freedoms and detention, in spite
of the report, refuses to put it in place? Many of us have noticed that in this whole affair the "justice" violates its own laws and is subject to the political agenda of the DGSI.

I recently learned from the mouth of the director of detentions of the Yvelines prison (Bois d'Arcy), whom I thank for his frankness, that my placement and my maintenance in solitary confinement were decided from the first day by very high ranking people and that whatever I say or he says or does, nothing will be done about it, that it is beyond him, the file will not even be read and I will remain in the solitary confinement area and that in any case nothing could change before the presidential elections.

I declare myself on hunger strike since Sunday, February 27, 2022 at 6 p.m.. At the moment I only claim my release, while waiting to demonstrate the slanderous side of this shameful accusation.