Arman Sagynbayev: I Was Tortured by the FSB 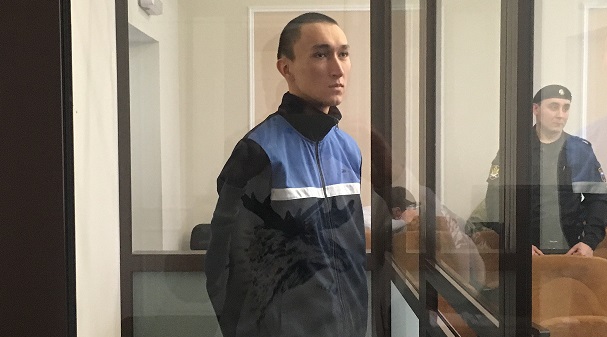 Antifascist and anarchist Arman Sagynbayev, who was arrested and remanded in custody as part of the Penza-Petersburg “terrorism” case, had until recently admitted his guilt. On September 4, he withdrew his confession, explaining that initially he had been tortured into testifying against himself and other young men arrested in the case, and then had been afraid to go against case investigators. His defense counsel has sent a statement to the Russian Federal Investigative Committee. Mediazona has published Sagynbayev’s deposition to his lawyer, in which Sagynbayev recounts how FSB field agents tortured him after detaining him in Petersburg.

In November 2017, officers of the Russian FSB [Federal Security Service] used unlawful investigative methodw (torture) against me. The circumstances were as follows.

On 5 November 2017, at approximately six o’clock in the morning, the doorbell of an apartment at [omitted] in St. Petersburg, where I was located at the time, rang. I opened the door, since when I had asked who was there, I was told the neighborhood beat cop was at the door. As soon as I opened the door, at least four men burst into the apartment. They yelled that they were from the FSB. They pushed a weapon (pistol) into my face before making me face the wall and handcuffing me with my hands behind my back. The men searched the apartment.

When the search was over, I was taken to a burgundy colored minivan parked next to the house whose address I have given. I would be hard pressed to name the vehicle’s make and model. A cloth sack was put over my head when I was in the vehicle. One of the men hit me in the body and head, demanding I tell them where I actually lived in St. Petersburg.

I could see through the fabric of the sack over my head that the man beating me was thickset and had blue eyes. I also made out the tattoo on the backside of his left hand: “For the Airborne Forces.” Later, I heard the other FSB officers call him [omitted].

Unable to withstand the beating, I told them where I actually lived in St. Petersburg: [omitted]. I was taken to the address I gave them, and there the men conducted a search without producing a warrant and without having official witnesses present [as required by Russian law].

When the search was finished, I was again put in the minivan and the sack was put over my head. At some point, I realized we were leaving St. Petersburg, but I had no way of knowing where we were going. I had a sack over my head and was handcuffed during the entire trip.

As we drove, I noticed that the man with the Airborne Forces tattoo, who had assaulted me, pulled a brown box from under his seat. There were two switches of some kind on the sides of the box. I cannot say what they were for. It is possible they controlled the intensity of the electrical current. Two wires came out of the box, which were attached to my thumbs. I was told they would check whether they had a current or not. I then experienced agonizing pain. I realized they were shocking me with electric currents. Meanwhile, the men in the vehicle asked me different questions. For example, I was asked to identify people whom I did not know, and when I said I did not know them, I would be shocked with the electrical current.

The men also hit me hard over the head with an object that resembled a day planner. When they realized I could not identify the people they named, they asked me other questions, for example, how to manufacture explosive devices and what parts were used in those devices. When my answers did not satisfy the men, I was hit over head and shocked with electrical current until I told them what they wanted to hear. They also told me that if I were not cooperative, they could do anything whatsoever to me and my loved ones, and they would get away with it, because I was a terrorist. They told me they could rape (“gang-bang”) my girlfriend [omitted], cut off her hands and my hands, and burn us with a soldering iron.

The torture lasted for around four hours, but I cannot say for sure, since I had no way of keeping track of the time, and I was in a great deal of pain.

When I was delivered to Penza Regional Remand Prison No. 1, there were burns from the electrical shocks on my hands, but no one paid any mind to these injuries, and the doctors did not record them when I was given a medical exam. Since I have been in custody in Penza Regional Remand Prison No. 1, no more illegal actions—beatings, torture, etc.—have been taken against me.

Fearing for the lives of my close relatives, for the life of [omitted], and for my own life, due to my health, which has worsened due to a serious illness, and due to the torture I endured, I testified against [Dmitry] Pchelintsev and myself, saying we had organized the so-called Network,  which was not really true.

Attorney Timur Miftakhutdinov: Did you report the circumstances you have described and the unacceptable investigative methods used on you to the public defender and the case investigator?

Saginbayev: I told attorney O.V. Rakhmanova everything and showed her the injuries from the electrical shocks on my hands. But I flatly refused to file a statement about the incident, since I still feared for the lives and safety of my relatives and the people I love. I thus forbade attorney O.V. Rakhmanova from reporting the incident to anyone and especially from sending complaints to the prosecutor’s office and the Investigative Committee. That was why I wrote to you in February 2018 that I had not been subjected to torture.

Miftakhutdinov: What position do you now intend to pursue with regard to the criminal case?

Saginbayev: My position, which I communicated to the case investigator when I was interrogated, has not changed for now.  I ask you to stick to it.

The deposition was conducted on May 31, 2018. Since then, Arman Sagynbayev has changed his stance. On September 4, 2018, he denounced his confession and decided to file a torture complaint.

The Penza-Petersburg “Terrorism” Case
The criminal case against the so-called Network “terrorist community” was launched by the FSB in October 2017. Over the course of a month, Yegor Zorin, Ilya Shakursky, Vasily Kuksov, Dmitry Pchelintsev, and Andrei Chernov were detained in Penza. Arman Sagynbayev was detained in Petersburg and extradited to Penza. Two Penza residents, Maxim Ivankin and Mikhail Kulkov, left Russia and were put on the wanted list.

In January 2018, Viktor Filinkov and Igor Shiskin were detained in Petersburg as part of the same case. On April 11, 2018, charges were filed against another Petersburger, Yuli Boyarshinov.

Most of the young men charged in the case are antifascists and anarchists, and many of them share a passion for the game airsoft. The FSB claims that all the arrested men belonged to an underground organization known as the Network and, allegedly, had plans to “arose the popular masses to further destabilize the political situation” in Russia and instigating an armed revolt by setting off a series of explosions during the March 2018 Russian presidential election and the 2018 FIFA World Cup. The Network supposedly had cells operating in Moscow, Petersburg, Penza, and Belarus.

The relatives of the accused in Penza have related that when the young men were detained, weapons were planted in their homes and cars, and late they were tortured. Viktor Filinkov, Dmitry Pchelintsev, and Ilya Shakursky have provided detailed accounts of their torture at the hands of the FSB. Ilya Kapustin, who was released as a witness, also spoke of being interrogated by the FSB as they tasered him. Like Filinkov’s wife Alexandra, Kapustin subsequently left for Finland, where he requested political asylum.

Pchelintsev and Shakursky claimed FSB officers tortured them with electrical shocks in the basement of the Penza Remand Prison. Shishkin made no statement about torture, although doctors found that the lower wall of his eye socket had been fractured, and that he had suffered numerous bruises and abrasions. Members of the Petersburg Public Monitoring Commission who visited him in remand prison noted numerous traces on his body of what looked like electrical burns.

The Investigative Committee has refused to open criminal cases in connection with Filink and Kapustin’s claims of torture. The lead investigator decided that in Filinkov’s case the taser had been employed legally, while the spots on Kapustin’s body had been caused by flea bites, not electrical burns.

Valery Tokarev heads the team of investigators handling the case in the FSB’s Penza office, while in Petersburg the investigation has been led by Investigator Gennady Belyayev.

The relatives of the accused have formed a support committee known as the Parents Network.

The accused have been charged with violating Russian Federal Criminal Code Article 205.4 Part 2, i..e., involvement in a terrorist community, which carries a punishment of five to ten years in prison.