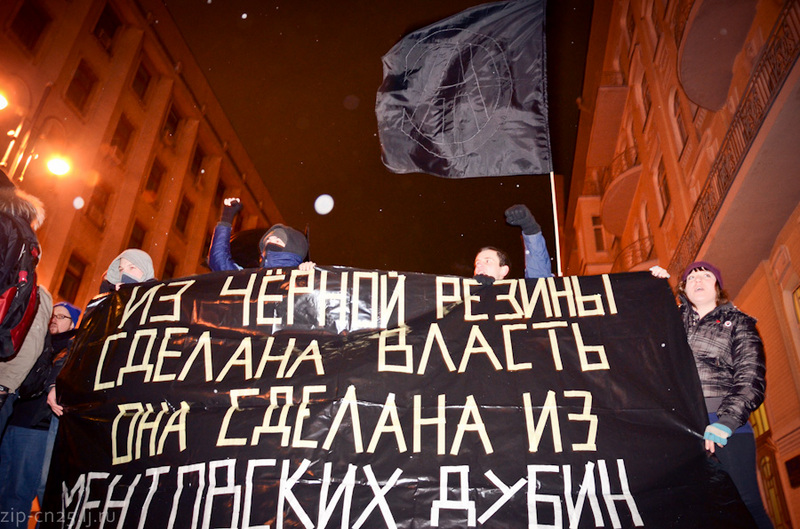 In October 2017, Russian Special Services (FSB) fabricated a large-scale criminal case against anarchists and anti-fascists, whom they declared members of the terrorist organisation called The Network. Russian authorities allege that the accused planned and prepared terrorist acts to be conducted during the coming presidential elections in March 2018 and the World Cup over Summer the same year.

In Penza, Yegor Zorin, Ilya Shakursky, Vasily Kuksov, Dmitry Pchelintsev, Arman Sagynbaev and Andrei Chernov were detained. In St. Petersburg, the cops arrested Victor Filinkov and Igor Shishkin. Ilya Kapustin is currently a witness.  The relatives of the arestees reported that their loved ones were tortured in order to extract confessions from them. All detainees in this case are in a difficult situation, under the threat of repetition of tortures, and very much need your support – and your solidarity. You can make a donation towards their legal costs here. The arrested will also be delighted to recieve letters of support. Here are their addresses: 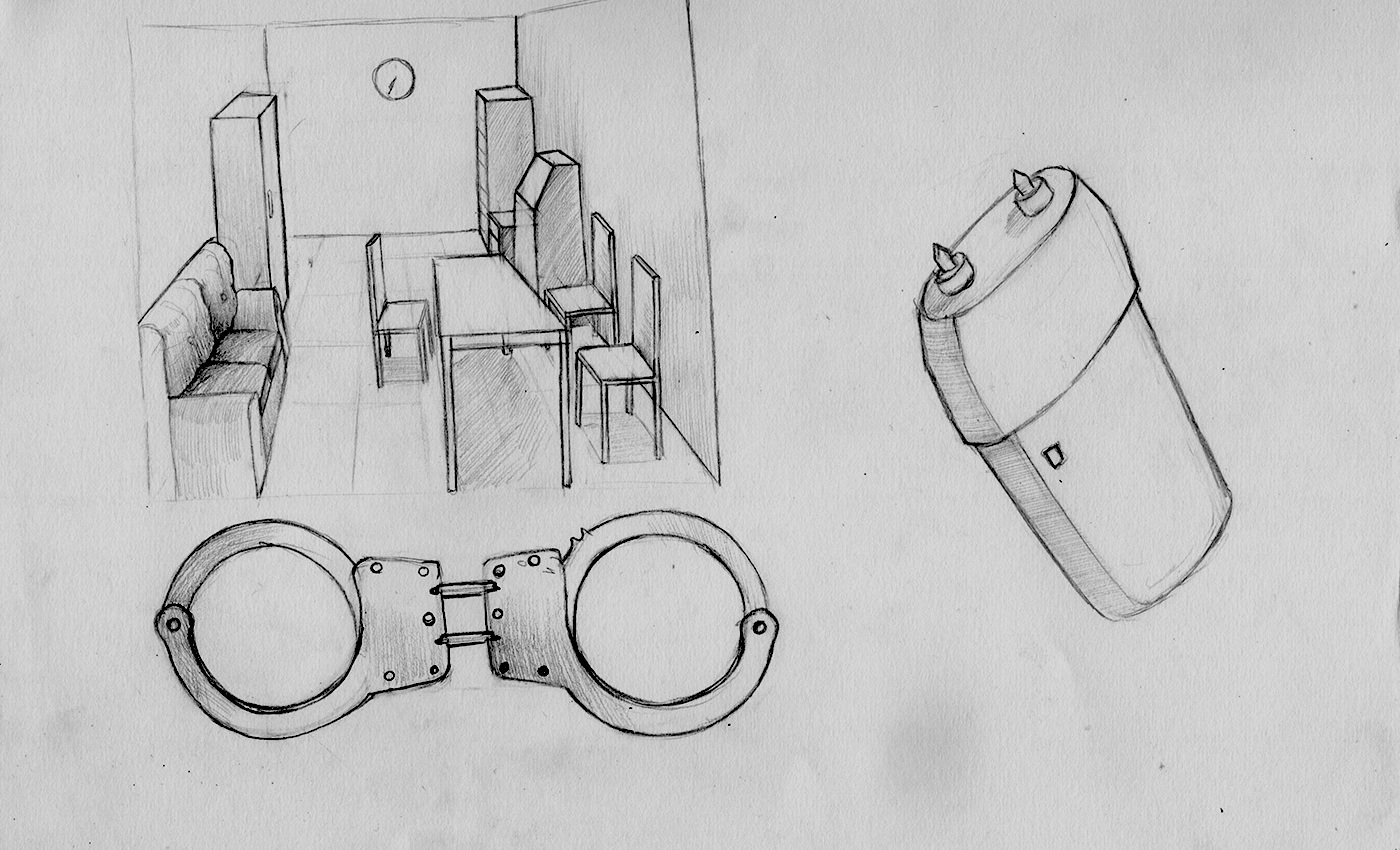 Two activists, Elena Gorban and Alexei Kobaidze, are charged with criminal damage of Putin’s United Russia Party offices. They were charged after, at the end of January 2018, unknown activists smashed the window of one of the branches of the United Russia Party in Moscow and threw a fire inside in protest against the upcoming presidential elections.

“No matter who becomes president, their policy is always the oppression and exploitation of a simple working people. We, as anarchists, offer self-government and direct democracy in exchange for presidents and other state institutions. Join our fight! “- the people responsible for that action said in their statement.

The police broke into the apartments where Gorban and Kobaidze lived on February 13. After the interrogations, the activists were released on bail, and now they are on the run.

In Chelyabinsk, five activists were detained on 19th February 2018 after the action near the local branch of the FSB. Persons unknown hanged a banner saying “FSB – the main terrorist” and threw a smoke bomb over the fence of the FSB property. The action was held in support of the anarchists arrested in Penza.

The activists, who prefer their names to be published, reported that the FSB officers tortured them with a taser gun, demanding that they admit that they hung the banner. They were eventually released on bail, but with a condition preventing them from leaving the country or changing address. You can help them with legal costs by transferring money to the account of ABC.

In February 2018, Crimean FSB arrested anarchist Yevgeny Karakashev. He is accused of “inciting hatred” and “justification of terrorism”, or in other words, posting a video on Russian social media page VKontakte. Karakashev is currently under arrest.

Eugene has been busy with activism for some time. Prior to his arrest, he took part in a picket near the FSB building in Crimean city Simferopol, and in November 2016, along with like-minded people, planned to hold a picket “against police arbitrariness in the Crimea” near the building of the Ministry of the Interior. This picket was banned by the local authorities.

In Janury 2017, on the anniversary of the political assassination of lawyer Stanislav Markelov and journalist Anastasia Baburova, there were memorial events across the country, which the cops tried to break. Anarchists were detained in Moscow, Petersburg, Murmansk and Sevastopol. The police conducted more arrests this year during commemoration actions for Markelov and Baburova. 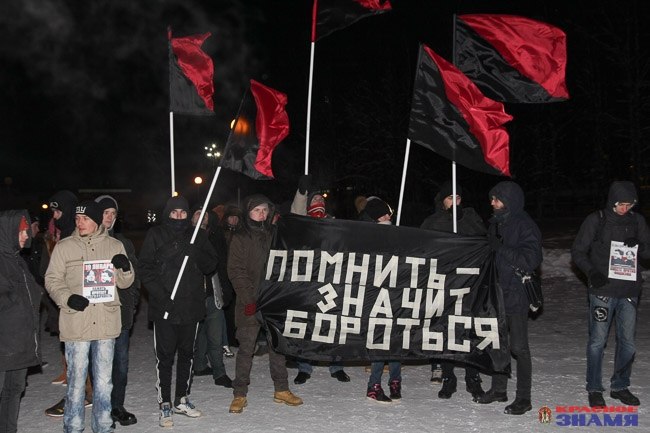 On 23rd February 2017, dozens of people were detained on left-wing “Desertir Fest” in the southeast of Moscow. The festival was held in protest against army conscription. The police considered such a cause unduly radical. In 2018 the festival did not take place because the cops prevented it in advance.

In Irkutsk in April 2017, searches were conducted with the participation of the SOBR (Russian Special Forces) unit and the Center for Countering Extremism. Nine people were detained. With regard to one of the activists – Dmitry Litvin – a criminal case was initiated under Article 148 of the Criminal Code (insulting religion). The rest were interrogated as witnesses in the case – the detainees themselves were sure that the main reason is different: local anarchists are the most active participants political life of the city and repeatedly intensified social protest.

In November 2017, when Russian antifascist traditionally commemorate Timur Kacharava: a musician and antifascist murdered by neo- nazis, the police broke the celebrations. As result, one person was arrested.

In April 2017, an anarchist Alexei Polykhovich was deported from Belarus after 12 days of arrest for participating in a rally in Minsk, where people protested against new taxes. During Summer, in the Belarusian city of Baranovichi, the riot police rushed into the lecture of Alexei Sutugi. The subject of the lecture was how to oppose the authorities from prison. Almost all those present were detained until evening. On October 12, a local court ruled that the materials confiscated at the lecture were extremist.

In October 2017 in the Belarusian city of Grodno the riot police interrupted a lecture of the philosopher Pyotr Ryabov. Pyotr Ryabov is sympathetic to anarchists associate professor of philosophy at the Moscow State Pedagogical University. He specialises in the history of anarchist thought. After the lecture entitled “Informal movement of Belarus 1991-2010” in Baranovichi, Ryabov was sentenced to 6 days of arrest for “dissemination of extremist materials”. After that, the Citizenship and Migration Department of the local militia decided to deport Ryabov and barred him from entering the country for 10 years. In Moscow, a series of pickets took place against the arrest of Pyotr Ryabov in front of the embassy of Belarus.

“The state overestimated my contribution to revolutionary propaganda: several of my lectures would have produced less hype than their prohibition. I think that the whole thing is in the term “anarchism”. The authorities remember, and the fact that the anarchists were condemned for the arson of the Russian embassy in 2010, and the fact that the anarchists in many cases led a mass protest against the law on parasitism, “ Ryabov said in an interview after his release.

In 2017 anarchists of Belarus were the most active force of protests against the tax on parasitism, which the Belarusian authorities wanted to introduce for the unemployed.

The Crimean anarchist Alexander Kolchenko celebrated his 28th birthday in prison where he is still kept – despite the recent exchange of prisoners between Ukraine and Russia. On his birthday, the anarchists from Ukraine, Czech Republic and Poland held actions at airports in solidarity with him.

Kolchenko was sentenced to 10 years in prison for the case of the so-called “Crimean terrorists” – he participated in actions against the entry of Russian troops on the peninsula, in particular, the arson of the local branch of United Russia and the office of the nationalist Russian community of Crimea. In November, the convict was diagnosed with a “weight deficit”. At the same time, the FSIN denied him the opportunity to study in absentia at a Ukrainian university. 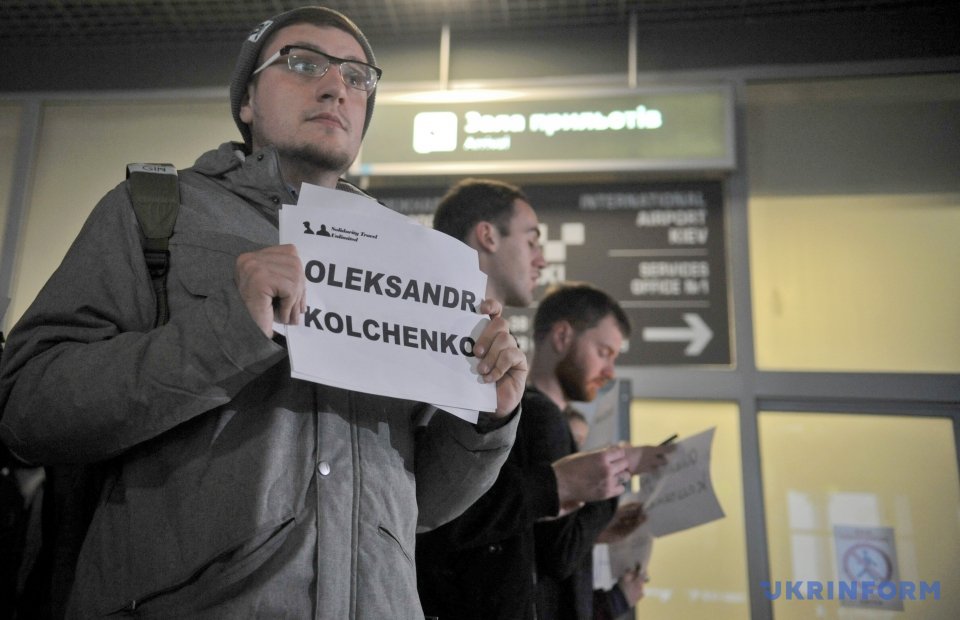 In Mordovia, anarchist Ilya Romanov continues to serve his sentence for terrorism: a conviction he acquired after he was injured with fireworks in October 2013. Due to the accident, Romanov lost his hand, but still, he was convicted for terrorism and sentenced to 10 years in prison.

In April, the ECHR considered one of the complaints of Romanov and awarded him 3,400 Euro in compensation for unreasonably long detention during the investigation. However, it is unclear how the prisoner will be able to receive this money – all his accounts are blocked by the state. The elderly relatives of Romanov, who tried to transfer the money to Ilya via the post office, were detained by the police. In May, Romanov was placed in solitary for four months, and in July, new terrorist case against him was launched

Ilya Romanov is detained in IK-22 Mordovia, the address: 431130, Mordovia, Zubovo-Poliansky district, st. Potma, n. Lepley. Write a letter to him, he will really appreciate it.

In May 2017, anarchist Alexei Sutuga was released from prison. In September 2014 Sutuga, known by the nickname Socrates, was convicted to three years and a month after he allegedly took part in a fight in a cafe. The anti-fascist himself did not admit guilt: he says that he tried to break the fight, but he did not beat anyone. The victims in the case were Russian neo-Nazis. 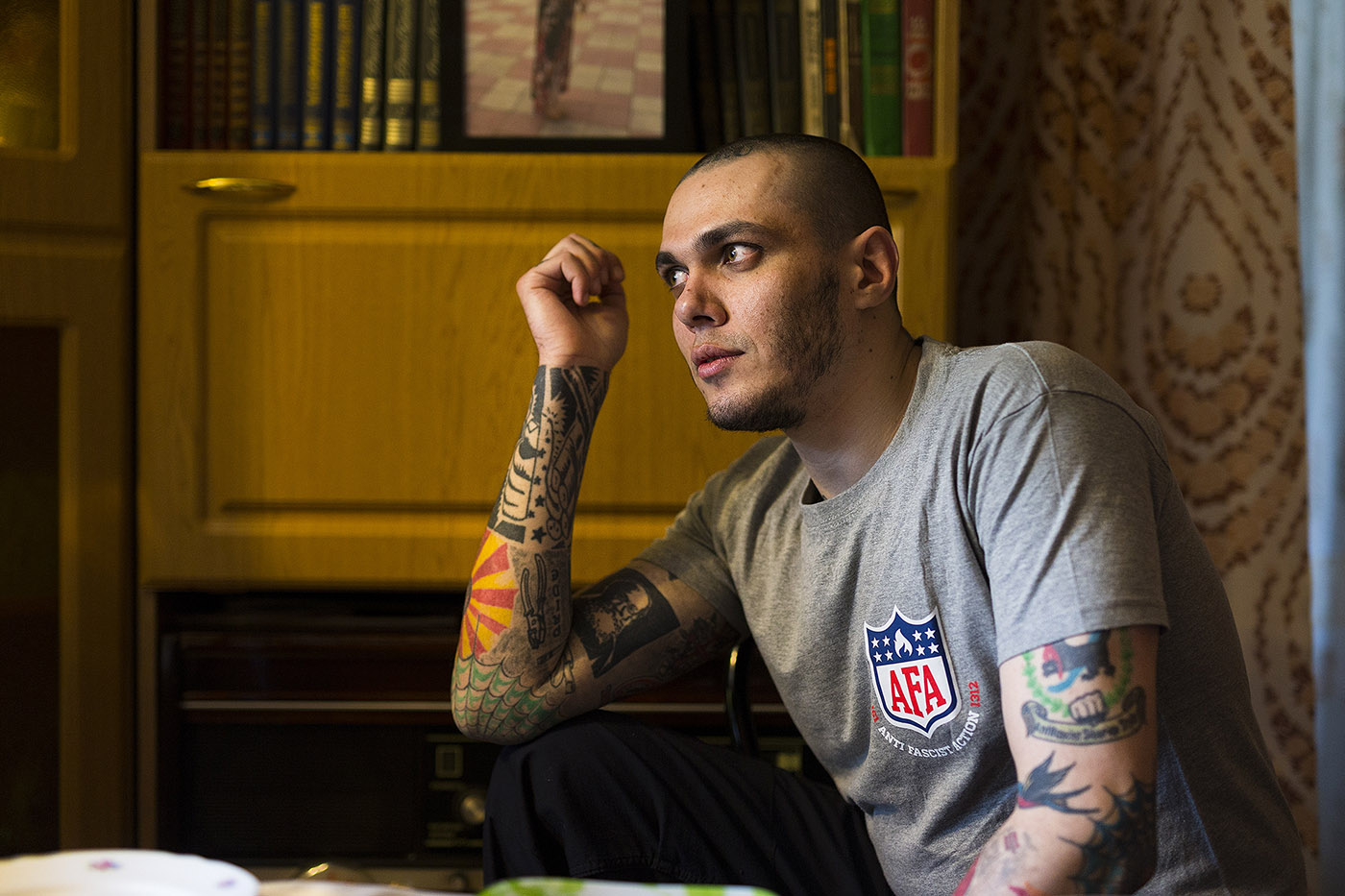 In October 2017, the antifascist from Tomsk, Yegor Alekseev, disappeared before he was due to be sentenced for “public calls for extremist activity”, or posting a YouTube video on his social media profile. At the moment he is safe in unknown location. According to Yegor, he decided to hide from the Russian justice system, fearing to get a conviction with a real term of imprisonment.

In early November 2017, historian and anarchist Dmitry Buchenkov escaped from house arrest and is currently in undisclosed European country. His escape was possible because he was not fit with electronic bracelet due to lack of resources. According to investigators, on May 6, 2012, Buchenkov allegedly attacked a policemen.He was charged despite of evidence clearly indicating that on the day of alleged attack he wasn’t even present: he was visiting his family in other town. The complaint of his arrest and politically motivated persecution is directed to the European Court of Human Rights.

This review was prepared by the team of the ABC-Moscow. It is not a complete list of the prosecutions of anarchists by Russian state – at the request of some of the comrades, the review does not mention all the misadventures of post-Soviet anarchists. If you want to help, you can find out how to transfer money for the needs of the ABC Russia on this page .

This text is machine translated and edited by Freedom News for clarity. Any issues, do let us know.