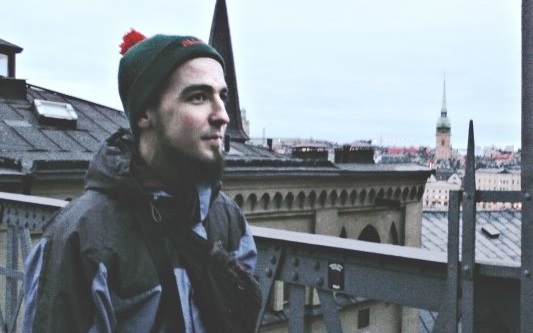 A new defendant has been added to the case of the so-called Network, Petersburger Yuli Boyarshinov. In the following article, OVD Info reports what it knows about how Mr. Boyarshinov was charged in the case, and about the pressure put on him in the remand prison where he is currently jailed.

Mr. Boyarshinov’s defense attorney Olga Krivonos told OVD Info that he was charged with involvement in The Network on April 11. Ms. Krivonos cannot discuss the particulars of the case, since she was made to sign a nondisclosure agreement concerning the preliminary investigation. Mr. Boyarshinov has been charged with involvement in a terrorist community (Russian Federal Criminal Code Article 205.4 Part 2) and illegal possession of explosives (Russian Federal Criminal Code Article 222.1 Part 1).

27-year-old Yuli Boyarshinov has worked the last several years as an industrial climber. From 2010 to 2015, he was a co-organizer of the Free Fair in Petersburg, events where people donated and took home all kinds of things free of charge. He volunteered at animal shelters.

Mr. Boyarshinov recounted that police from the 53rd Precinct struck him in the face and stomach several times: they did not like the fact the young man had refused to talk with him, citing Article 51 of the Russian Constitution, which guarantees an individual’s right not to incriminate himself. The beating ended when another policeman entered the room, was outraged by what was happening, and asked his fellow officers not to “cause mayhem.”

Police found 400 grams of smoke powder, a relatively weak explosive obtained by mixing saltpeter, charcoal, and sulfur, on Mr. Boyarshinov’s person. Smoke powder is now most often employed in the manufacture of fireworks, as well as by hunters and sport shooters who pack their shells manually. Mr. Boyarshinov has a hunting license, but not a firearms permit. Ms. Krivonos could not say why Mr. Boyarshinov needed the smoke powder, since it fell under her nondisclosure agreement.

On January 22, police searched the home the young man shares with his parents. Law enforcement officers confiscated equipment, books, and the anarchist magazine Avtonom.  He was then taken in a police cruiser to St. Elizabeth’s Hospital. Hospital staff did not ask him for either his internal passport or insurance policy. The detainee was given an MRI scan of the brain, and his blood was drawn. Mr. Boyarshinov told his lawyer the physician who administered the MRI scan was quite worried about his condition. After the examination, the young man was transported to the Temporary Detention Center. In conversation with his lawyer, Mr. Boyarshinov suggested he was taken to the hospital first so that it would be impossible to say he had been injured in the Temporary Detention Center. The doctors noted bruises on his face.

On January 23, Primorsky District Court Judge Yelena Tsibizova ordered Mr. Boyarshinov remanded in custody for thirty days. His relatives were not informed of the court hearing. Ms. Krivonos had not yet taken the case, and so Mr. Boyarshinov was represented by a state-appointed attorney. At that point, he had only been charged with illegal possession of explosive substances.

Pressure in the Remand Prison
After the hearing, Mr. Boyarshinov was incarcerated in Remand Prison No. 1 aka The Crosses Two, where doctors noted his injuries: blows to the stomach and head, and a black eye.

As the young man told his lawyer, his cellmates immediately tried to chat him up.

The anarchist symbol had been traced on the dusty glass in the cell’s window.

On January 31, Mr. Boyarshinov was visited by two men who gave only their first names, Kostya and Dima. Kostya had been present during the search at Mr. Boyarshinov’s home. When he asked where they were from, Kostya and Dima gave him their work number at the Petersburg office of the Russian Federal Security Service (FSB). The supposed FSB officers listed the names of defendants in the Penza-Petersburg “terrorism” case and many other names, promising Mr. Boyarshinov that if he did not talk to them, “things would get worse” for him. The young man refused to speak with the FSB officers, again invoking his rights under Article 51 of the Russian Constitution.

“You’re making things worse for yourself, and you’ll go to prison,” the security service officers told him.

On February 12, Mr. Boyarshinov was transferred to Remand Prison No. 6 in the village of Gorelovo, Leningrad Region, on the orders of an investigator in the Primorsky District office of the Interior Ministry, allegedly, “for the purpose of conducting investigative procedures.” Ms. Krivonos said that then, after she filed an appeal against the extension of Mr. Boyarshinov’s remand in custody, staff at the Primorsky District Court telephoned her and asked her client’s whereabouts. They were looking for him to fill out papers. Ms. Krinovos argues the transfer to another remand prisoner violated her client’s rights. The Gorelovo Remand Prison is a former medium security correctional labor colony, and the conditions there are considerably worse than in The Crosses Two Remand Prison, which was built to satisfy the requirements of current legislation.

Mr. Boyarshinov told his lawyer he was placed in a cell where there were forty inmates, although it was designed for thirty-five. When he moved into the cell, his cellmates beat him up for no reason. They forced him to clean the cell, and because of this he was not let out for walks outside in the yard.

“We made things worse for you. Now talk, or conditions will get even worse.”

Mr. Boyarshinov again refused to speak with them.

On March 2, the remand prison was inspected by members of the Leningrad Region Public Monitoring Commission (PMC). Mr. Boyarshinov told his lawyer the Leningrad PMC members summoned the inmates one by one to chat with them in the office of a warden, who was present during their conversations.

FSB officers visited Mr. Boyarshinov again immediately after the PMC’s inspection. The very same day, he and another inmate (who had not spoken to the PMC) were transferred to a cell that held approximately 150 inmates: the number of inmates constantly changed. There were only 116 bunks in the cell, which was reserved for men charged with murder, rape, and robbery, and who had served time before. However, the inmates who smoked were not segregated from the nonsmokers. At first, Mr. Boyarshinov had to sleep on the floor.

“During the nearly two months of his incarceration in Gorelovo, no investigative procedures involving Yuli have been carried out. Due to the fact the conditions of my client’s imprisonment in terms of cell assignment and personal safety have been violated, his state of mind has deteriorated considerably,” said Ms. Krivonos.

“There were no complaints and statements from the persons held in custody,” reads a report of the visit, posted on the remand prison’s website.

“He has not been tasered, but the conditions in which my client is being held are tantamount to torture,” argued Ms. Krivonos.

She also said that Mr. Boyarshinov has chronic tonsillitis, which has been aggravated by his living conditions.

Visit by Leningrad Region Human Rights Ombudsman Sergei Shabanov to Gorelovo Remand Prison. Yuli Boyarshinov sits with his back turned to the camera. Photo courtesy of Remand Prison No. 6 website and OVD Info

Petersburg industrial climber Ilya Kapustin was a witness in The Network case. He claimed FSB agents tasered him, after which he left Russia, requesting political asylum in Finland. Kapustin told OVD Info that, during his interrogation, investigators had asked him whether he knew Boyarshinov, when they had last met, and why he had telephoned him on the day he was detained.

“We had a professional relationship. I telephoned him around the time of his arrest to ask him whether he wanted a job shoveling snow off rooftops,” Kapustin explained.

Translated by the Russian Reader. Thanks to Comrade NN for correcting a typo.