The Hungarian uprising of 1956 and we 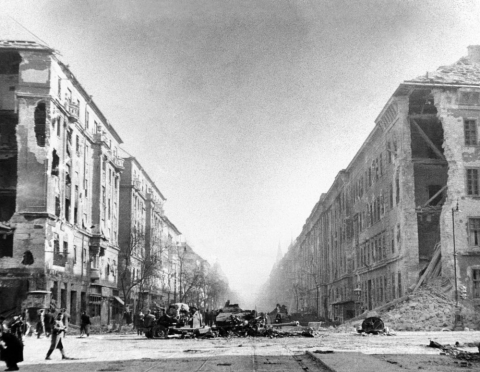 In October-November 1956 in Hungary there was the most powerful anti-totalitarian speech, one of those that took place in the Eastern bloc until 1989. October 23, 1956 in Budapest, began the demonstration, which was attended by tens of thousands of people. The demonstration turned into a popular uprising. Soon the revolt spread to the entire country. In the uprising attended the broadest segments of the population of Hungary, and above all - the working class. Hungary under the pseudonym Pannonikus wrote in the French ultra-left journal Socialism and Barbarism ":" Young workers aged 18-30 were the most active revolutionary element in the enterprise.

They are even smaller than the other, could support the suppression of the monstrous, the atmosphere of coercion and terror that reigned in enterprises ... "Everywhere there are new bodies - the revolutionary and national committees in cities and areas of workers' councils in enterprises. Hungarian workers remembered the private capitalism and would not return to previous orders. anti-communists grouped around Cardinal Midsenti were in the minority and did not dare to openly articulate their goals of revenge.

In the Soviet troops entered Budapest.The city started street fighting. In enterprises having workers' councils of Budapest who took the company under his control. For several days the troops retreated from the city. However, on November 4 the Soviet army captured the capital of Hungary, and put in power the pro-Soviet government, headed by J. Kadar.

However, the history of the Hungarian revolution did not end there. November 14 was created Grand Central Workers' Council of Budapest, which brought together delegates of almost all enterprises in the city, as well as representatives from other cities.Workers' councils were conceived as a truly democratic bodies: "for the Hungarian workers and their delegates to the most important aspect of the councils was their democratic functioning. Between delegates and the working class as a whole maintained close contact. Delegates were elected only for the implementation of workers' claims. It may be noted that workers often re-elected delegates, who had violated his mandate.Workers disliked delegates who took on too much power ", - noticed eyewitness Bill Lomax." Workers' councils were able to organize a general strike under foreign occupation.

Military victory of the USSR-ovsky bureaucracy turned cruel defeat in the ideological struggle. "The Hungarian revolution destroys the most gigantic fraud in history - the idea of the bureaucratic regime, as a socialist, and destroys it is not theoretical debate, and the fire of an armed rebellion - wrote in the journal Socialism or Barbarism" anti-authoritarian Marxist Cornelius Kastoiadis - Usurpation of Marxism, socialism, and banner of the proletarian revolution layer totalitarian exploiters looks from now in the eyes of the broad masses of working people as an intolerable insult.Even the least informed, it became clear that the Stalinists were the same representatives of the working class, as overseers - the representatives of the convicts. "

Hungarian workers' councils have something to criticize. For example, they advocated the separation of powers between the Council, government and parliament.But this dual power inevitably would have ended a new collision. Nationalism of the Hungarian rebels have been reacting to the power of the Soviet empire, imposed by the Hungarian people the Stalinist regime. However, many of the great revolution, starting with the Reformation in the XVI century, have gone from the national liberation movement to the idea of world revolution. If we assume antibyurokraticheskaya revolution of workers councils would spread to other countries in Eastern Europe, and later the Soviet Union and Western countries, then all hopes of the Hungarian nationalists to return to the previous order would have disappeared, like a dirty puddle, a gust of spring wind.

Hungarian events of 1956 - is some kind of litmus test as to their political position buddy. Soviet propaganda announced these events fascist revolt and still many supporters of "real socialism" Soviet-style continue to defend this version. According to anti-communists, the Hungarians tried to restore bourgeois democracy.For many of today's national-patriots - is anti-Russian nationalist rebellion rebellious vassals. In modern Hungarian events of 1956-th considered only as a national liberation uprising and prefer not to think about trying to establish the authenticity of the rebel government of workers councils.

Few today remember the Hungarian workers' councils. The memory of that Hungarian uprising was directed against the Soviet Union and partbyurokratii, but not against the socialist ideals - is not favorable nor the ideological heirs of Soviet totalitarianism, not the defenders of capitalism.

Revolutionary Victor Serge wrote that though the Russian Revolution of 1917carried the seeds of totalitarianism, it was a lot of other embryos.Similarly, in the Hungarian Revolution in 1956, the Polish Solidarity movement, the movement of Soviet dissidents were concluded embryos restoration of private capitalism, the nuclei of nationalism and cultural degradation. Attempts to counter bureaucratic "real socialism" the idea of government workers have failed. So do we need today, the memory of those killed "buds"?

One of the paradoxes of our time is that even a disappointing result of the restoration of capitalism only strengthens the existing system.We know up front that any attempt to change the world will not lead to anything good and just to usher in new parasites. This happened in 1917, it was repeated in 1991, there is nothing else and can not be.

To get rid of this "learned helplessness syndrome" should remember that the Revolutionary era - a time when "everything is possible", a time when people are doing the fate of the country, and do not put a cross on the ballot next to the one proposed by his party.Attempts to create a society without classes and the exploitation of man by man, relying on themselves by workers councils and factory committees, rather than on party dictatorship and failed. But the defeat of the workers' councils in Hungary, 1956, as well as the defeat of the Spanish Revolution 1936-1937. was not shameful. No shame in that defeat in the unequal struggle. The memory of the Soviet paternalistic state, destruction of property by the ruling layer with the approval or indifference of the Soviet workers are not able to inspire people to struggle against capitalism.So whether it is time to remember the experience of workers' councils in Hungary in 1956, Russia 1905 and 1917, Spain 1936, 1937 and cease to wait until there will be some "tough guys" and will solve our problems for us.