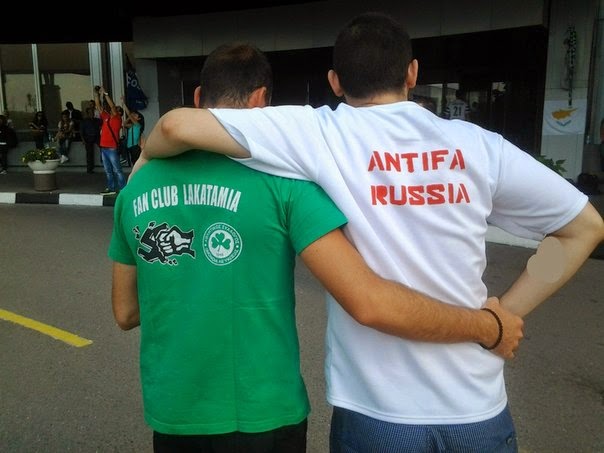 After the drawing play-off round of the Europa League, it became clear that the Cyprus Omonia will hold two games with the  Dynamo Moscow. This meant that the legendary fan is association  Gate 9 will come to us in Russia. These guys are known far beyond the borders of their country as because of its hot support for the club, and because of the anti-fascist views. Well, I as a fan of Greek-style ultras and anti-fascist initiatives on the football tribunes decided for the sake of the holiday to come to Moscow for a few days.

Dearest guests, as you know, accepted ​​to meet at the airport, so we headed to the Sheremetyevo. Company on this trip I amounted a fan of the anti-fascist Lokomotiv Moscow.  Learn flight number to me was not difficult, because before that I had corresponded with some Omonia fans of the internet. The plane was flying from Larnaca, because Nicosia is no major airport (it was abandoned in 1974 after the Turkish invasion). Traveled all over the airport from the beginning to the end we find a necessary terminal to us. In the evening, the plane with the team and a bunch of fans arrived.

At that moment of the Russian dismal environment at the airport has disappeared, the Greeks began to make noise and sing songs. Guards a little stunned, but did not dare to interfere with the fans. Immediately caught the eye heterogeneous composition of guests: there were old people and children, quite a few were women. In contrast to Russia, where football is a haven fascist marginals in Greece and Cyprus, it is really part of the culture.   Approaching to the bus, fans unfurled a cloth with the words "We are in Moscow for your team," and headed for to the hotel Cosmos.By airport  drove 4 bus, one of them was driving the team. That is the Omonia fans arrived somewhere 150 (3 completely filled the bus). We climbed to the course funny place at the end of the bus with the noisy fans.  On the way to the hotel taught Cypriots Russian obscene expressions, as well as singing songs in Greek (also with obscene language). I was in a shirt PAOK, so discuss the attack in Thessaloniki Office Golden Dawn and the action of solidarity with the 46 arrested Omonia fans of PAOK. Greeks also learned various details about the Dynamo and their glory Cop club. They saw on facebook joint photos Dynamo fans and enemies of Anorthosis Famagusta, so they been configured for the upcoming match seriously.   Talked a bit about the ultras scene in Cyprus. The right-wing fans at Anorthosis, APOEL, Apollon Limassol. Good ultras have actually Omonia and AEL Limassol and Nea Salamina. Also noted apolitical fans AEK Larnaca. This is essentially all of the major movements in Cyprus, because the state itself the Republic of Cyprus by car you can drive around for a couple of hours and large cities can be counted on the fingers of one hand. With APOEL is known from Omonia severe resistance, because of the club in 1948, went away the communist-athletes for the establishment of Omonia. We can remember how fans APOEL Champions League match against Zenit fraternized with the blue and white on the basis of orthodoxy.   Initially, I was told to find out about tickets in one hardcore female fans Omonia. But she did not know anything about their program stay in Moscow, so we only shared with her a few things and some stickers. The next day they had planned a sightseeing tour of Moscow, so we decided to come in the second half of the day in the hotel and ask them for information on tickets.   The next day we came to the hotel.Cypriots began to return from trips and cultural relax on the ground floor. Part of the fans however did not go on a trip and would prefer to sit in the pub. As we know some fans Omonia Communists, so go to the mausoleum for them was a priority.One of them returned from the tour, we learned why many Nazis in Russia with such a history behind him, we give him time to explain the intricacies of Russian postmodernism. I also show a few dudes than antifa in Russia as a whole is involved, they are particularly surprised Straight Edge theme, for Cyprus this nothing is known, and the fans before the matches drink and smoke regardless of political views. I gave them a stack of stickers of various Russian left-wing organizations, that they gave her comrades from Cyprus. Another showed them zine Left side terraces with an article about their movement Gate 9  in Russian.

Talked to a one guy over territorial disputes in Cyprus. His family suffered during the invasion of the Turkish army in 1974. He said that people are caught between two fires: on the one hand the Turkish imperialism, on the other Greek nationalism. The Turkish invasion occurred after ethnic unrest fueled by the far-right organization EOKA. The military junta black colonels in Greece also sought to gain control of the island. Gate 9 is not supported in this conflict none of the parties, support of the unity of the Turkish and Greek inhabitants of the island.   As a result, we were called to the man of fifty years, they said that he was boss. It was one of the founders of Gate 9. He said that the tickets will be purchased at the ticket office at the stadium and informed how much it is necessary to approach the bus.   On the day of the match, we come to the main entrance of the hotel which has slowly started to have fun green and white. There brought a drum and began to drink the traditional Russian drink vodka. At the entrance are decorated with flags and roses, on the curbs hung out all banners. Nobody really not cared about it thinks security and visitors to the hotel. Initially, there were about 10 people from the fan club Cosa Nostra, and in the end all gathered. You could see people with merch other clubs with the anti-fascist ultras. There were people with scarves Standard Liege, Hapoel Tel Aviv, on the drum was an old sticker St. Pauli.There was one man in a cap Green Ghetto (fan-group club Agrotikos Asteras from Thessaloniki). Almost everyone the second was on the clothes of  anti-fascist symbols. At the time, I even forgot that we are in Russia, where for such clothes can to earn problems. They said that in Cyprus they are periodically fight with the Nazis of Apoel and people then depart the hospital, so that the Russian nationalists in this regard could hardly have them than to surprise. In addition, a week was coming second leg in Nicosia and per any attack visiting Dynamo fans would have to respond.

At 5 o'clock drove transportation and off we went to the Arena Khimki. On this trip, guests of the Russian capital could learn another local landmark - stoppers. If Cyprus 2-hour drive from one end of the island to the other, in Moscow except that you can go to the suburbs.   Arriving at the stadium, we marched from the bus to ticket office. Prior to that, people have bought scarves Locomotive, one can only guess what the fans think Dynamo saw this picture. Next to the ticket office of the fence stood dynamo fan and the Greeks began to scoff at them. Waving scarves locomotives, called them chickens (I said that in the Russian anti-fascists called the Nazis in honor feathered birds). Blue and white, too, began to answer back and Greeks invited them to his guests to continue the dialogue.

Then we began to to pass control, to which Cypriots were not ready, because they have this all easier. Cops why it took their sticker, fans absolutely do not understand what they wanted from, because the cops they all explained exclusively in Russian.And the stadium itself was too bourgeois, even really have nowhere to hang banners. Guest sector is in an absolutely idiotic place: behind the glass at the top. Banners have become hang directly on the wall of the aquarium and where it is necessary. Guests complained that it was not possible to buy souvenirs at the stadium.

Dynamo fan sector was banned for this match for racist behavior. Basically, the stands were ordinary people, but still a certain part of the ultras Dinamo was able seep into the stands. And it is not showed himself absolutely nothing. Omonia fans are the only ones that we reminded at the stadium, and not in the Opera.   Came to Moscow fan clubs Cosa Nostra (Limassol), Akaki, Lakatamia, Tersefanu (Larnaca), Astromeritis, Lythrodontas, Thessaloniki, UK. At the sector present the flags of Cyprus. What is interesting Cypriot Nazis do not use them and just hang the flags of Greece.As you know the Greek neo-Nazis are complete idiots and their entire program comes to controlling the largest number of islands in the Mediterranean Sea. Russian Nazis kill people and want to separate parts of the regions of Russia, therefore of the Greek patriots they just laugh at how over the clowns.   Omonia fans also brought a flag with Marx, Engels, Lenin and Stalin, and after the game gave it to us for permanent storage. Gate 9 renowned open-minded and to the same tribunes can sit supporters of the Communist Party of Greece and the anarchists in the first place are all united here the idea of anti-fascism. I hung the flag of St. Pauli. Was a banner in memory of the deceased in a car accident Omonia fans, which can be seen on many team games. During the match, various songs were sung by classical motifs type paokara. Has long been known that the Greeks love and know how to sing in the stands. During the match Omonia twice came out ahead, especially the first goal at the beginning of the meeting created on our tribune joyful atmosphere.  Dynamo player received a red card, but the Cypriots were still unhappy with the refereeing.

The match ended with the score 2-2, which is a good result given the class and financial resources Dynamo.  Shirt Antifa Russia exchanged for scarf "Antifa Hooligans Gate 9 Salonica". By bus we went tothe crowd cops surrounded , the Cypriots for the first time in life seen so many. The hotel said goodbye, exchanged contacts. Guys overall support from the Russian anti-fascists, and would be happy to see them at their stadium in Nicosia.