Today, 29 October, the Moscow Regional Court considered the cassation representation Khimkinskaya prosecutors. Investigators in the criminal case of an attack on the administration of Khimki complained that on October 18 Khimki court, after the abolition of the district court of its next decision on the extension of detention Solopova, refused to grant the application of the investigation and released by Max on his own recognizance. The investigation believes that Solopova must be left in jail because he can make a repeat offender, to put pressure on witnesses, escape from custody.

But most importantly - stay at the Max Freedom hamper investigations.Maxim's lawyer replied that investigations against his client are not kept for six weeks, and recently the investigation was officially zavereshno. After reading obvnyaemogo with the case materials it is likely to give in court.

At the meeting Mosoblsuda Oct. 29 at the request of Max to the case file was attached certificate from the State Humanitarian University, which states that since his release, Max attended all the lectures of his course.

In addition, as a defender in the process was introduced one of the guarantors of Maxim, a human rights activist Lev Ponomarev of the Movement for Human Rights. He accused the prosecutor's office that she wants the judge to impose a trial on the merits, that the procedural is not allowed at this time.For this investigation insisted read out the testimony of one witness at the trial on October 18.

We recall that Max and Alex are accused of organizing attacks against Khimki administration July 28, 2010. Anti-fascist protest against the illegal felling of forests Khimki authorities regarded as hooliganism. In addition Gaskarova and Solopova, in the figure and the other defendants - the social activists.

Donate Maxim Solopova the court came to his parents, members campaign for Khimki hostages and journalists.

The campaign for the release of hostages Khimki continues, only now the main demand of the authorities - the closure of a criminal investigation into the events in Khimki, on July 28. 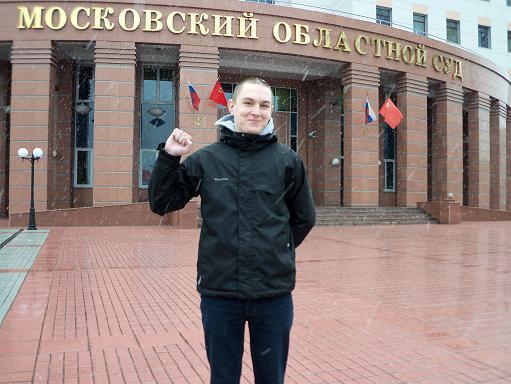