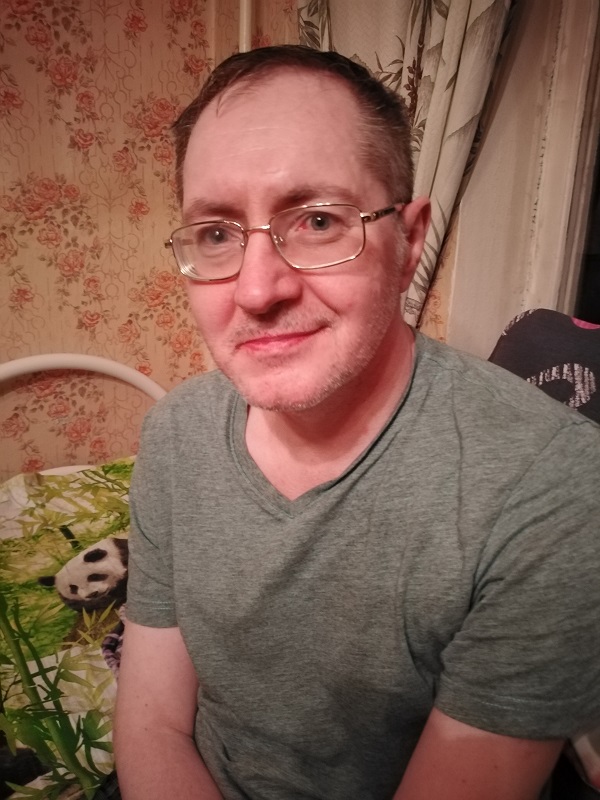 Ilya Romanov has been an activist in the anarchist movement since 1987. He was sentenced to prison twice, for 10 years in Ukraine in 00’s and 7 years in Russia in the last decade. In 2019 he almost died as a result of a cerebral hemorrhage. Due to the delay in the medical intervention, he lost the capacity to move the right side of his body.

His former wife succeeded to have him released on health grounds in April 2020. With help from friends, relatives, fundraising and a successful case at the European Court of Human Rights against Ukraine (lodged in 2005, resolved in 2020) Romanov has received rehabilitation and medical aid, but he is still disabled. His pension is approximately 90 euros a month. Ilya is able to walk with help of an aide, and he is able to use a prosthesis (he lost one hand as a result of an explosion, the other hand is paralysed).

Ilya is in need of constant care, which cannot be provided by his family, and social institutions do not offer the option of permanent residence.

You can support Ilya Romanov's family  via the ABC Moscow paypal account:
https://wiki.avtonom.org/en/index.php/Donate

Yegor Lesnykh is an anti-fascist, animal rights activist and active member of the hardcore community in Volzhk (in the metropolitan area of Volgograd, former Stalingrad).

Yegor took part in the demonstration against election fraud on the 27th of July 2019 in Moscow. Police assaulted the demonstration, and the prosecutor claimed that Yegor assaulted police while attempting to dearrest another demonstrator. In December 2019 he was sentenced to 3 years in prison.

On the 30th of January 2021 Yegor was granted parole by the local court in the Volgograd region, as he had been a model prisoner without a single sanction. However, the prosecutor appealed this decision, and falsified a discliplinary report claiming that Yegor had violated clothing instructions the previous November.

It is possible that Yegor will have to carry out his full sentence. You can support him by letters:

Ilya Shakurskiy is one of the prisoners in the fabricated Penza-St. Petersburg terrorism case. He is doing time in the republic of Mordoviya, notorious for its prison camps since Soviet times.

In April and May, Shakurskiy was sent to the hole for 27 days altogether for fabricated violations, the real reasons being his refusal to be interrogated by the FSB without his lawyer.

Kirill, then 14 years old, was arrested in Moscow in November 2018 after the suicide bombing by anarchist Zhlobitskiy in Arkhangelsk, in which 3 FSB officers were wounded. Kirill was in contact with Zhlobitskiy, and he was charged with the preparation and storage of explosives. He was waiting for his trial under house arrest.

Nikita Uvarov was arrested last year, when he was only 14 years old, in the city of Kansk in Siberia, accused of studying and researching in order to carry out a terrorist attack. Uvarov was finally released pending trial on the 5th of May. He was not ordered to stay under house arrest.

Co-defendant of Nikita, 15 years old Denis Mikhaylenko is in prison for the time being, you can support him by writing to

All addresses of prisoners we currently support in Russia are up to date: