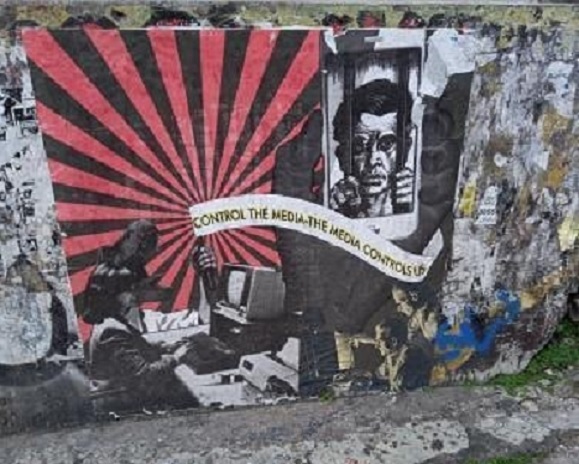 Although the online magazine "Assembly" is active since March 30, 2020 - as soon as there was a feeling in the air around that this hateful status quo had finally cracked - we consider September 6 to be the beginning of its real impact on the social life of Kharkiv. On that day, about 300 student kids from different regions of Ukraine spent several sunny Sunday hours on the central park lawns due to attacks by securities on young people for walking on the grass. The site, which was created as a place where the peaceful segment of social struggle and self-organization could meet with the radical, began to confirm its name. So, for the first time since the fall of 1920, when thousands rallies of Nabat and Makhnovists thundered across the city, the anarchist press (not just groups in social networks like in previous years on our memory!) is bringing people out to Kharkiv streets again.

Sifting through a huge amount of material for a counter-information project every day is not easy, but our efforts are not in vain. It seems that the first flashes of lightning are already illuminating the horizon:

- "The Black List of Kharkiv Employers", as the most popular our column, already has a database of stories from more than 500 enterprises, and now we work to move its activities beyond the virtual space in the form of a network of workers’ mutual aid;

- The mentioned protest action "Abolish the Guard!" took place after we investigated the beating of a student couple by the park securities and at our call;

- For the second year, since June 2020, we have been exclusively covering directly from workplaces wildcat strikes at the Electrical Heavy Machines - one of the last large productions here - against the plundering by the management leading it to bankruptcy. The peak was the morning blockade of avenue by hundreds of strikers on the first day of spring 2021, after a gathering convened by our freelance reporter at the plant’s checkpoint demanding salaries for three months. Last August, he also put forward an initiative to remove the loyal trade union committee and elect delegates controlled by workers instead, but too few people came due to the layoffs in the previous six months;

- Information support for a volunteer campaign to restore an old summer cinema and an abandoned park on the outskirts of the city. Part of the territory was put in order, a few months later the city services were engaged in its improvement thanks to that publicity;

- Also we showed and, when was possible, coordinated the winter disturbances in the suburbs and the region against the almost double rise in the price of household gas.

As of the end of last year, half of the population in Kharkiv region had arrears in payment for gas. With the onset of cold weather, canceled that winter tariff increasing is planned to be returned; last week have already began protests in front of Kharkivgas offices against the gas shutdown for entire streets. Can you imagine how it will be: mass absence of heat and light in 15-degree frost due to debts or just rolling blackouts? It would not be an exaggeration to say that the region is on the verge of a social explosion.

It is obvious that without sufficient work with public opinion, this revolutionary potential will either be intercepted by the parliamentary opposition and street far-right gangs in their own interests, or will go into the sand after the first partial concessions from the authorities, leaving no permanent horizontal structures. Thus, we need to seriously increase the ability to promote our own agenda, and when the streets get hot, travel across the region, communicating with people and personally getting to know the situation on the ground.

All of it requires funds that we cannot raise without the help of comrades from more prosperous countries. Crowdfunding will go until September 30 inclusively. To support us via PayPal or a personal bank card, as well as to see the progress of the campaign and the plan for spending the amount, we invite you to come here.

"…A strong sense of tension, of urgency, is dictating the words of who is writing this, as if time were running out. These are brief allusions to questions which are certainly addressed between comrades every day. There is not one single way, but the need to understand each another, find each another, perceiving who is around and wants to fight now is very important. May the exchange be fruitful and may it lead us to proposals that are up to the situation, both as specific movement, for those who still believe in it, and those who want to put a spanner in the works individually. But we need to have our say in this world with strength and resolve. The perception is that there are open ears and ready hands, and sometimes, yes in certain streets (not all of them obviously), the anger is palpable…"

Let's make Kharkiv together a beacon of hope and inspiration for all those striving for Anarchy, at least in the Eastern Europe! We salute you with our raised fists and for the time being dissolve in the darkness of our concrete jungle with a conspiratorial smile...

The crew of media group