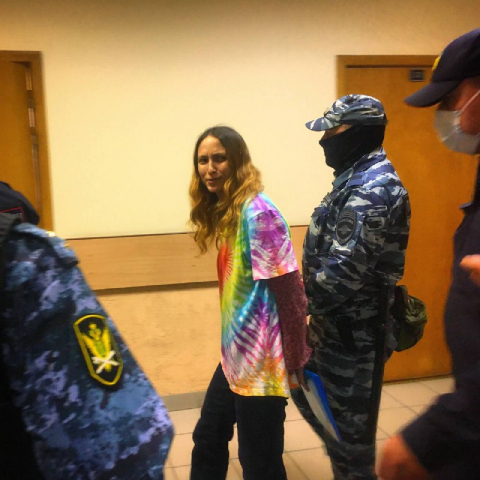 St. Petersburg. Russia. On May 30, the St. Petersburg District Court extended the pre-trial detention of Aleksandra Skochilenko until July 1. The defense submitted a character description of her and documents on her health and ability to serve house arrest, which the judge added to the file but did not consider.

Originally published by Avtonom. Translated by Riot Turtle with assistance of translation tools.

Several dozen people came to support Aleksandra. Fifty-three of them signed a request to enter the courtroom, which was ignored by the judge.

On June 8, Aleksandra is to be sent for a forensic psychiatric examination. The lawyer predicted that she would stay in the hospital for at least three weeks, after which the specialists would have to prepare an expert opinion – and that would take another three weeks. Therefore, the investigation will not be completed before the end of June.

We would like to remind that feminist artist and musician Aleksandra Skochilenko was arrested in St. Petersburg on April 11, when she replaced price tags in a store with leaflets about the situation in Ukraine.

After two days of searches and interrogations, the activist was imprisoned – she was charged with Article 207.3 of the Criminal Code – “public dissemination of knowingly false information about the deployment of the Russian Armed Forces to protect the interests of Russia and its citizens,” the second part of which reads “motivated by political hatred.” The new law allows imprisonment of up to 10 years for this offense.

When imprisoning Aleksandra Skochilenko, the court did not take into account her health condition – congenital gluten intolerance and bipolar disorder can be fatal in prison conditions. In pre-trial detention, she temporarily receives gluten-free food. A support group of activists has written a petition for her release.

The aid organization PEN America and human rights activists from Amnesty International are also demanding the release of Aleksandra Skochilenko.