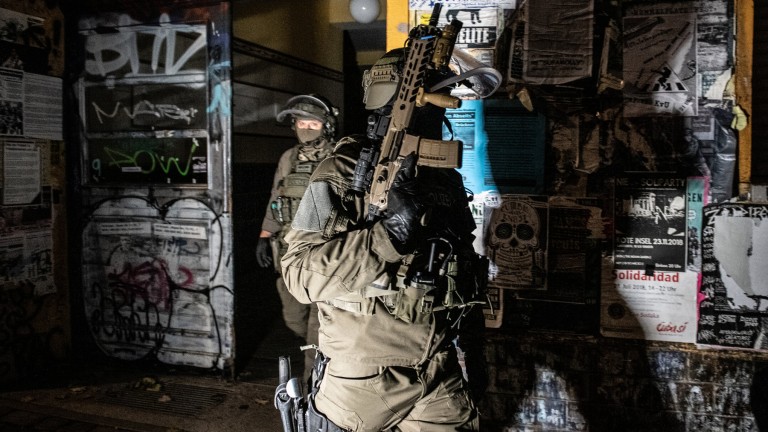 On the 15th of November, five hundred cops, including special forces with assault rifles, attacked Rigaer94 to make a house search in the case of a trouble in a shop some month before. The investigation is labeled as „robbery and bodily harm“. A video published by the shop owner shows, that this is an obvious lie in order to create a reason for a martial attack against rebellious structures. The pigs came at 6 o‘clock in the morning and managed to open the doors quickly, meanwhile aiming with their rifles towards anyone showing up at the windows.

In the same moment, four other houses were searched in different areas of Berlin in this issue. Later the Minister of Interior, Andreas Geisel (Socialdemocratic Party), declared that all this was not politically motivated but instead was an offensive against the criminal underworld. But everyone knows that the raids were nothing else than attacks on anti-authoritarian ideas and combative structures in order to claim the monopoly on violence.

In addition to the pigs, the guy who declares himself the lawyer of the official housowner (the british mailbox company Lafone Investments Ltd.) entered the scene in Rigaer Strasse in the company of some construction workers in order to destroy the doors of the house. But he was stopped by the presence of comrades and finally sent away by legal threats by the lawyer of Rigaer94. Nevertheless the presence of the dubious circles that claim the ownership of the house for several years now, is again a meaningful sign. The last time this happened was in 2016 during the attempted eviction of the house-bar Kadterschmiede. Back then we saw a massive, three-week long operation led and coordinated by the police. Their mission included various construction and security companies as well as the housekeeper-enterprise playing the role of the legal owner. But after the epic loss of the struggle for Kadterschmiede, our enemies failed in several court cases to proof the existence of a legal mandate.

Nevertheless the same people now again started proceedings against Rigaer94 to evict the bar Kadterschmiede and destroy the doors. The doors of Rigaer94 are known to be a thorn in the eye of those who want to pacify the house as well as the street. The Minister of Interior called the doors some month before an „obstacle for manhunt by police in this area“.
We do not know if the lawyer represents the Lafone Investments Ltd., nor do we know if the pigs will wait for a court decision or respect another decision in our favor. Even if so, though we choose to also use the legal procedure, we think that only our presence in the streets will prevent an attack or turn the attack on us into a counter-offensive against the state, its institutions and capital. This is after all the true purpose of anarchist projects like Rigaer94.

Lately, like most of the time the last years, there is a strong police presence in the area of Friedrichshain and an extensive use of the police helicopter. It looks like the strategists in the repressive administration of Berlin try to force us into a defensive sitiuation by confronting in the same time the Rigaer94 and the anarcha-feminist house-project Liebig34, that will lose its contracts in the beginning of the next year. There are high expecations for a strong resistance to defend Liebig 34 but with the threats against Rigaer94, which is just three houses away, we who are living and/or fighting in the „Dangerzone“ of Friedrichshain, need your help.

What can you do ?

If we get informed about a police action against Rigaer94 to destroy the doors or evict the occupied rooms of the house with a court verdict, you will find informations here on twitter or here . In that case invite people to come to Berlin and create with us a situation like in January and summer 2016 (call 2016 ), when the huge police operations against Rigaer94 were repelled by violent and non-violent mobilizations. Read also this and about the riots.

Another text from crimethinc about the struggle.

To turn the moment of attack on us into a moment of chaos, solidarity and destruction, we need more hands. Come to Berlin when the situation escalates – but be aware that our structures are limited.

If you are not able to come to Berlin – we are happy about every solidarity action. Everything with relations to german interests, to german economics and everything what belongs to repression apparatus and the capitalist system is a target.