Lecture: From narodniks to the social revolutionaries - Rebellious movements in 19th century Russia 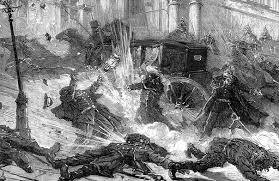 In the 19th century the tsar of Russia ruled one of the most glorious countries in Europe and it was because of the tsars army that the european autocrats could still stay in power. Still at the same time Russia was one of the most underdeveloped countries in Europe as it only abolished serfdom in the 1860s. Tsars of Russia believed that they were ruling by divine right and were very hostile to any new reforms. You could end up in Siberia for just toasting the revolution in Poland.

This year Finland is celebrating the 100th year of it’s independence, but the independence of Finland or any other Central European country would have not been possible without the revolution in Russia.

The freedom of Europe depended on the faith of the revolutionary movements in Russia, but it was also these movements that had to fight in the most austere conditions in Europe. The revolutionary movement in Russia was not by far the first to resort to the use of violence but it was the first one to manage to kill tsar Alexander II. In the end, the insurgents were either hanged or imprisoned for decades in the prison in Pähkinäsaari, but in spite of this the bombs still kept flying to years on end. Organisation called People’s will consisting of Narodniks and their followers would become the paragon for all the armed revolutionary movements in 20th century and some even consider them to be the forerunners of modern day terrorism.

From todays perspective the actions of the Narodniks may look violent and fanatic, but the Socialist Revolutionary Party who followed in their footsteps later took hold of the majority in the council legislating the Russian constitution in the first ever elections in Russian history, after the fall of the tsars regime.

This lecture will focus on the years preceding the first revolution in 1905. In the autumn of 2017 there will be two follow-up lectures on the topic, of which the first one will be focusing on the revolutions in 1905 and 1917 and the second one on the rebellious movements during first years of the Bolshevik despotism.

Our speakers are Finnish and international anti-authoritarian researchers and activists. Events are organized in cooperation with A-ryhmä and AutOp. You may also follow lecture online (both real-time and recording) from youtube-channel of A-ryhmä:https://www.youtube.com/user/AryhmaHelsinki Our program is created by the participants themselves, if you want to join or simply get in contact, write a-ryhma at riseup.net.

Children are welcome to any events of A-ryhmä by default! We have now also a separate room in case children get tired of lecture. Prams can be left in the hallway on the 6th or 1st floor.

Kupoli is inaccessible space. There is one small step at the downstairs front door, and an elevator that runs between from floor 1 to 6. Kupoli is on the 7th floor after a staircase.

There are two searate, rather spacey but not wheelchair-standardized, unisex toilets. There are stairs between Kupoli and WC.