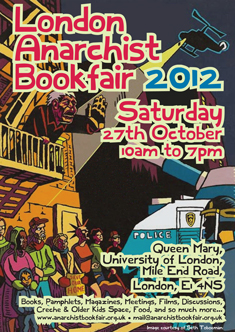 I was invited to speak, and I agreed immediately - LAB is the biggest (or perhaps secondmost biggest, after San Fransisco) anarchist bookfair in the world, could be also the biggest annual anarchist event in the world. One may only crudely estimate number of participators, as entrance is free. Free programs were handed out, with a suggested donation of one pound. 2600 pounds were collected, which is a rather good estimation of number of participators.

Event took place in premises of the Queen Mary University in the London East End. Organisers paid a lot for rent - 6000 pounds, but commercial exhibition centers would have been even more expensive. Besides rents, also tickets of speakers and printing of propgram demands money. Event is financed with donations, benefit concerts, both those willing to have a table and those who want to organise a lecture have to pay a bit.

Event went on from 11 AM to 19 PM, there were 10 paraller lectures and videos were constantly screened in one room, 3 different creches for children and youth of various ages (from 2 to 8, from 8 to 12 and from 11 to 16 years), that means, event was much more short but also more intensive that similar events in Russia. This was due to financial restraints - an event of 2 days would have been two times more expensive. University premises were obviously too small - biggest auditorium had a capacity of up to 400, but some events were interesting for much more people. Corridoors were at times jammed due to crowds, due to overcrowding territory was heavily littered towards the evening. Event really needs a bigger venue, but apparently it is impossible to find one with any kind of reasonable cost. Apparently, London Anarchist Bookfair reached limit of those possibilities, which are available for a free event in that city, current market of venues does not allow it to grow further.

Organisers made an effort to involve disabled - place was wheelchair accesible, some lectures had translators to sign language or paper translitteration.

Differently for such events in Russia, no food was served - apparently this was a condition from the university. But around the university, there were plenty of cheap pubs and ethnic restaurants.

As it took time to check stalls at I had two speeches to do, I could only listen 3 events myself. First was Michael Albert's "Occupy Vision, Theory & Strategy", my impression was mixed. Among works of Albert, I am most interested about such economic stuff as "A Quiet Revolution In Welfare Economics" with Robin Hahnel. But his topic was completely different, basically a short introduction to his recent pamphlets, published on the wave of the Occupy movement. It was kind of introduction to his second lecture, goal of which was to recruit new adepts to "International Society for Participatory Society" , , but I missed that.

Albert has his own preferred economic model called "Parecon", I would say it is something between Market Socialism and Bakuninist Collectivism, but that could be inaccurate. I am not that much interested of this particular model towards which I am sceptical at least, but Albert is an interesting speaker as one of the very few people in libertarian socialist spectrum, who both understand economics and may talk about it.

As for the rhetorics, Albert was not a bad speaker, but as far as the content goes, it was 90% water on how bad is capitalism and how we really may get rid of it if we want to. And also on why anarchists and leftists have failed to get they point across. I was not in a need of a motivational speaker, and thus I had problems to concentrate to get the little substance there was around. But I invited him to speak in our lecture series in Helsinki university via skype anyway, as a number of people able to talk about economics in anarchist circles may be counted with fingers of one lumberjack hand.

Next lecturer was Martin Wright from London I was promised "a pugnacious attack on lifestyle anarchism, snobbery, rampart sexism, academics and polyamory by a veteran anarchist", and I was definitely eager to hear that. Genre of the lecture was somewhere in a middle ground between a serious talk and Stand-up comedy. Humour has always played a big role in the movement of Great Britain, but for me it has a mixed record. Some stuff meant to be fun is indeed fun, such as 1980's Class War tabloid, but pretty often also not. For example, in Norfolk, a "humorous anarchist paper" Now or Never is being published,  but I never found anything fun in it. Wright was at times fun indeed, but also he was a typical example of this widespread British analysis, according to which main reason of unsuccess of anarchists are the other anarchists. Right now Wright is participating to group ALARM - All-London Anarchist Revolutionary Mob,  . I liked their table, it had mostly posters and a free xeroxed paper, which had only articles about MMA and trouble of anarchists in Nizhni Novgorod in Russia. These folks have their priorities right. Behind the table, some kids sipping British version of Jaguar. That was all great, but still I was wondering, if punks liked the lecture first of all because of it kind of justified ignorant existence. You may never master mysteries of chessboxing, if you only train chess, or only train boxing.

Wherever you find many anarchists, there is also plenty of beef. Each year, organisers are receiving a letters demanding to ban someone from the bookfair. It is seldom that any of these propositions have political grounds. For example, three years they got a long letter, relating to a dispute dating back to 1985. Organisers wary about "policing" such issues, anyone whose work or organisation accords with anarchist principles can have stall. Obvious exceptions are green capitalists and trotskists. This year some sad trotskists had a table outside in the rain, apparently people felt too sorry to revenge for Kronstadt and Makhno, and they weren't punched. Someones stall was poured mayonnaise, but I did not heard reports of settling scores more violently.

So, in the end all the kinds of types were around, from some people from Dial House to insurrectionalists and adepts of especifismo. I did not bought any books for myself, as I will have to carry 25 kilos of them for Helsinki infoshop anyway. But I could not resist 12 pount Bakunin hoodie, sold by the Anarchist Federation. Also, I was given collection of bulletins of Russian Prisoner Aid bulletins fom 1923 to 1931, printed by t, I love that stuff! It was nice to have a chance to thank in person various people, who sent us stuff to Moscow for so many years, such as KSL and Aufheben. I should have arranged paper orders for Helsinki infoshop, but as I was busy with other things I forgot all that, hopefully someone else from Helsinki did that as it was quite a many people from the city.

Unfortunately, I did not saw any of my childhood heroes - neither Ian Bone nor Stuart Christie.

It was a bit strange, that as far as I know nobody used the opportunity to organise events in Friday or Sunday. Obviously, organisational group had no resource for that, but I do not undertand, why no other group is eager to use biggest annual concentration of anarchists in the city to do anything else than parties or drinking. Apparently, most of the London anarchists prefer hanging in their own circles to organisation of wide, open events. The same in Moscow, with exception of Libcom 2011, until this year only Autonomous Action has had interest to organise meetings or infrastructure for wider anarchist movement.

After Wright, I had two of my own talks. First on anarchist prisoners in Belarus. I was invited to replace some local Belarusian, who vanished few weeks before the bookfair. I expected, that troubles of anarchists in the potato republic would be of interest to maximum 3 people, but eventually much more came. One of the good sides of the UK anarchists is that due to imperial past, they consider most exotic places being of interest, including places which are of interest to no-one else. I shared a nightplace with an activist of Abahlali baseMjondolo from Durban of South Africa, he was positively surprised for a small action we did for them during football championship of 2010 . I missed his speech but I heard it was well attended and liked.

My next speech was with Gabriel Levy about Pussy Riot and other repressions in the former Soviet Union. Apparently, idea of the organisers was to draw attention to other human right problems on the wave of Pussy Riot hype, such as shooting of strikers in Zhanaozhen of Kazakhstan. This was obviously a rather naive idea - when I had finished my 20 minutes on Pussy Riot and Levy began his part on grievances of oil workers, few dozen peoples immediately left the auditorium. I do not understand, why oil workers, leadership of the "Left Front" which is now facing a charges with 10 year penalty for "treason" in Russia, national bolsheviks and tortured disappearing inhabitants of Ingushetia and Dagestan do not want to position themselves ad LGBT or queer-feminists, as that would guarantee a whole another level of interest to their problems.

Last lecture I attended was "Anarchist Economy" with David Graeber, Michael Albert, Iain McKay (not to be confused with singer of Minor Threat) and some fourth dude (later I learned it was Joseph Kay from libcom.org). Auditorium of 400 people was fully packed, people were standing on stairs and it was hard to even get it. Apparently, queer feminism has not took all of it over yet, and middle-aged men have still their lebensraum in anarchist movement.

No surprise, there was no any discussion on economics, instead another talk for 12 year olds on how capitalism is evil, accompanied with a sort of competition of the most witty anecdote on the topic amongst the speakers. In my opinion, Graeber won that one, even though he laughed himself more than audience did. Few critical questions from the auditorium and attack of McKay against Parecon managed to scratch a bit the otherwise self-complacent atmosphere of dull consensus. Obviously, current level of the movement and format of the event does not allow anything more, but definitely we have something more to strive to.

Other events I did not attended were most various - some historical (such as about Chartist uprising of 1839), planning of upcoming protests against G8 the next year, "anarchism and spirituality", "anarchism and sexuality" and so on. Participators were most diverse, as I expected, but good half were subcultural people, after all this was the city were punk was born. But the dominant outlook did not influenced the contents - biggest share of the workshops were on social issues, for example against workfare, "housing estate is revolting", "building a fighting union with your workmates", in this context I do not see reason to always whine about prevalence of "lifestyle anarchism" in UK, maybe it was some years ago the case but definitely not anymore.