Evening of absurdity: a concert in support of Andrei Kutuzov was in Tyumen

We were born to make come true Kafka (Bahchanyan VA)

In the evening on December 10 in Tyumen cafe "books" was a concert in support of a well-known civic activist Andrey Kutuzov party "Autonomous Action, accused the FSB of distributing" extremist leaflets. Dec. 14 to begin the court in this case. Educated public accusation is false and sucked from the finger. People who know Andrew personally or by his active work, decided to organize themselves and express their solidarity with him through the recital.Here's what came of it. 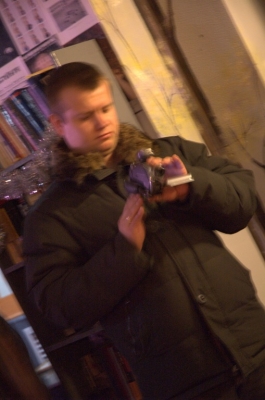 A small "book" creaking and swelling under the weight of people who are prone to extremism, who came to support the most extremist. In one corner rose an impressive mountain of clothing. Here you can see: the students and teachers, musicians and writers, psychos and the townsfolk, idlers, vagabonds, and workaholic. Brisk waitresses scurrying through the crowd looking for without paying for coffee. The people excited, encouraged and requires spectacles ...

Lead takes the microphone.Guests dumped to a makeshift stage. Eshniki wipe the camera lens. Miraculously opened the door to the realm of absurdity, and a magical effect captures the audience, carrying a whirlpool into the unknown was given creativity and improvisation. 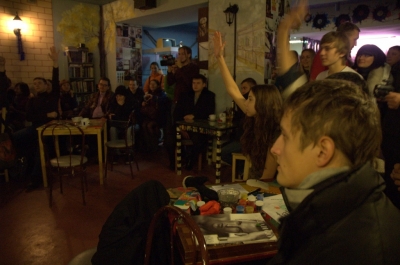 Many things have been this glorious evening: not convey any event, no atmosphere. But briefly.

Hero of the occasion was reading poetry in English.Eshniki took was scratching their heads, but the translation was followed. Were the songs are different and in large quantities: political, funny, on the buckets. Tenders were: painted, sculptured, composed - received extremist shirts. Imperceptibly evening came to an end, but ... 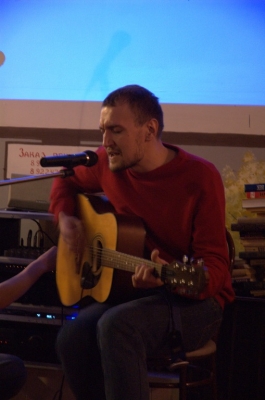 However, the general feeling of absurdity does not leave until now. Camus wrote that "the absurd is born from the collision of the human mind and reckless world of silence."In this case, the "extremists" on the type of Kender are trying to somehow rationalize and structure the world to understand what is happening and why, and so-called system of opposition, tries to keep the status quo, preserve "reckless silent" because:

b) they are afraid of this world and understand it does not want / can not.

So the evening of absurdity only part of the embattled kingdom of the Absurd.