Frozen Time: Getting Used to Horror and Madness 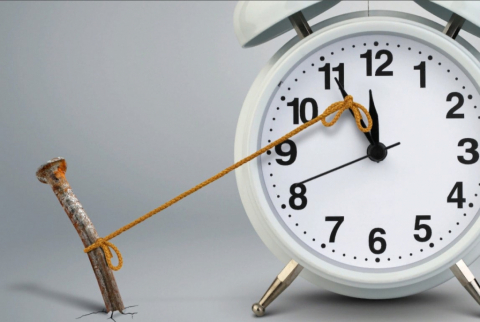 Translation from Crimethinc., as part of a collection of anti-war texts from Russia.

This text appeared as the March 27 episode of the podcast released by Autonomous Action, the web platform established by the most prominent Russian-language anti-authoritarian network. For the sake of brevity, we have left out the section containing updates on state repression, a ubiquitous feature of Russian anarchist publishing.

More than a month of the so-called “special military operation” in Ukraine and other insane decisions of the Russian authorities has been enough for many people to become accustomed to it.

We are getting accustomed to messages and reports from warring Ukraine—to photos and videos of destroyed cities—to news of the deaths of acquaintances, acquaintances of acquaintances, and some famous people—to the flow of refugees from that country, which has already exceeded three million. Indeed, the total number of people who have left their homes since the beginning of “denazification” is already more than six million.

During the “denazification” of Kharkov, 96-year-old Boris Romanchenko, who survived Auschwitz, was killed in a bombing. In the same place, anarchist Igor Volokhov, who fought against the invaders in the territorial self-defense units, died under Putin’s rocket fire. Also in the vicinity of Kharkov, according to the Ukrainian Ministry of Defense, Russian shelling damanged the memorial to the victims of the Holocaust.

Anarchists in St. Petersburg on March 12, standing with an obscene banner (“denazify your own anus, dog!”) at a time when there were more riot police than human beings in the city center.

Oksana Baulina, a journalist for The Insider blocked in Russia, died under shelling in Kyiv. Previously, she worked at FBK, until she was forced to leave Russia due to the risk of criminal prosecution. In Mariupol, the dead are buried in the yards of destroyed residential buildings.

On March 21, the list of “extremist organizations” was added to the international corporation Meta. Its products (Instagram, Whatsapp, and Facebook, which was previously blocked in Russia) have been and are used by millions of Russians, as well as institutions, including government agencies and state corporations. The decision should come into effect after a futile appeal; lawyers are still speculating as to what this will mean for users and marketers.

The social media platform VK also blocks pages at the request of the Prosecutor General’s Office: for instance, the fan-page of the liberal political scientist Yekaterina Schulman, the pages of Left Socialist Action, the Union of Democratic Socialists, the political party “Yabloko,” the student magazine DOXA, and finally, our VK page for avtonom.org.

A court in Moscow considered, among other things, the slogan “Fascism will not pass!” [“Фашизм не пройдет!”] to be “fake news about the Russian army!” (I wonder which of those three words?)

In Ufa, the members of the Marxist circle were declared a terrorist group and sent to a pre-trial detention center; allegedly, they intended to overthrow the government.

In Khabarovsk, unknown people announced a rally “in support of the Russian army.” They invited residents to bring Ukrainian flags, portraits of Stepan Bandera, Taras Shevchenko, and other Ukrainian figures for solemn burning in exchange for the distribution of sugar. However, the event did not take place—except for the police and journalists, only a few people came to “fight the Nazi reptile” for a package of scarce goods.

Sergei Savostyanov, the Moscow City Duma deputy of the Communist Party, believes that Russian troops should also “denazify” the Baltic states, Poland, Moldova, and Kazakhstan. This “people’s choice” was supported by “smart voting” in 2019. [A sarcastic remark about Russian dissident politician Alexei Navalny’s strategy of “smart voting,” which helped to raise Savostyanov to power.]

One of the journalists who was prosecuted for “fake news,” Alexander Nevzorov, who has been known since the time of perestroika, wanted to publicize some compromising evidence from the 1990s on representatives of the ruling clique. But he correctly concluded that after what they have done and are doing, being in power, nothing will discredit them.

A sticker in Moscow on Sparrow Hills near Moscow State University: “Death to Putinism—peace to the peoples.”

Desertion and Support of the “Special Operation”

Even at the very beginning of the war, an as-yet unconfirmed message was received from Ukraine about a Russian warship whose crew refused to storm Odessa. But recently, quite reliable publications began to appear in the Russian press about soldiers who left their units, about the search for conscripts, whose participation in the “special operation” of the Ministry of Defense of the Russian Federation was not initially acknowledged, about entire detachments of security officials from different regions who do not want to take part in combat operations.

Recently, in Karachay-Cherkessia, a group of brave women blocked traffic on a bridge, demanding information about their relatives participating in a “special operation” in Ukraine and missing from communications.

As we have noted in the past, the announcement of the “denazification” and “demilitarization” of Ukraine did not cause a “patriotic upsurge” similar to the “return of Crimea” in 2014. Over the past eight years, in addition to the hostilities provoked by the Kremlin’s puppets in Donbas, we have also experienced a deepening economic crisis, a drop in the average income of Russians against a backdrop of rising prices, the “optimization” of education and medicine [i.e., austerity measures], the raising of the age of retirement, and, finally, extremely unpopular measures under the pretext of fighting COVID-19. Ratings and trust in the authorities have plummeted.

Various public opinion polls seem to show 60-70% support for the “special operation” in Ukraine. However, the sociologists who conducted them say that most of the respondents simply refuse to answer questions. As for those who express approval, on closer examination, it turns out that they approve of the picture from Russian TV, according to which Russian troops are liberating Ukrainians from Nazis. It is no coincidence that approval of the so-called “special operation” is directly tied to the age of the respondents—in the older age groups, there are proportionally more people who receive information about what is happening exclusively from television. Russians who believe television propagandists manage not to believe even their Ukrainian relatives and acquaintances who survived the bombings.

Anti-war pickets and street performances continue in Russia despite all the bans, arrests, and administrative and criminal cases, but the number of people showing up is not comparable to what it was between late February and early March. On the other hand, green ribbons and anti-war leaflets and graffiti are much more common on the streets of Russian cities than the letter Z is on cars. We assume that at least for the next several weeks or months, until the situation in Russia changes radically, protest will be expressed not so much in the form of suppressed mass street actions, but rather in the form of street “partisanism” [i.e., anonymous individual acts of direct action] and increasing sabotage by security officials and their relatives.

It is possible that someone in power has not yet completely lost touch with reality, and that this explains why martial law and general conscription have not yet been declared in Russia—there are fears that this would engender sabotage on a massive scale.

“[Smash] war.” One of a series of new anti-war posters from Autonomous Action.

Last week, the infamous “Men’s State,” previously recognized as an “extremist organization,” was finally added to the register of banned organizations. However, this decision from Russian law enforcement agencies does not prevent these neo-Nazis from supporting the Kremlin’s “special operation” or from helping the Kremlin to persecute those who disagree. Yesterday, it was our turn—the leader of the “Men’s State” Pozdnyakov called on his associates to write denunciations to Roskomnadzor demanding that they block the pages of avtonom.org on account of our anti-war position. Our public Vkontakte was already blocked on the territory of the Russian Federation at the request of the Prosecutor General’s Office as early as February 24. Now it is available only from outside Russia (or via VPN).

Anyway, the Internet has become useless for anything other than pictures of cats. And it is better not to look at cats, either.

Yes, the blocking of Pozdnyakov’s Telegram channel does not prevent him from starting other channels and mass open chats. The Taliban is also still banned in Russia, which in no way prevents its representatives from negotiating with the Russian authorities and being considered “normal partners.” It is possible that neo-Nazis from the “Men’s State” also dream of breaking into the highest echelons of Russian power. And in the growing madness, it is not certain that they will not succeed.

“A person is always responsible for making a choice—so what is your choice?” One of a series of new anti-war posters from Autonomous Action.

Despite the fact that catastrophic events continue to escalate at an insane rate, time itself seems to be frozen at a point of uncertainty right now. It is clear that the current situation is unstable and cannot continue indefinitely. But time will not move until it becomes clear when and how the current crisis in Ukraine, Russia, and around the world will be resolved.

It is important to note that against the backdrop of war, repression, and the complete uncertainty of the future, grassroots networks of solidarity are playing an increasingly important role. Networks of friends, volunteers, and human rights activists help to ensure that those who are arrested do not disappear. People help each other so that arrestees’ cats and dogs are not left alone at home. They find medicines, they acquire food despite the shortages, they track down information. Activist and volunteer networks collect aid for refugees abroad. Often, such solidarity networks function much more efficiently than state institutions and international organizations with more resources. The future belongs to self-organization and self-determination!

“Attention! Common sense warning: Military operations lead to increasing prices for all categories of goods and services.” One of a series of new anti-war posters from Autonomous Action.