The Lord of the Rings: “Trends of order and chaos”, episode 87 (6 January) 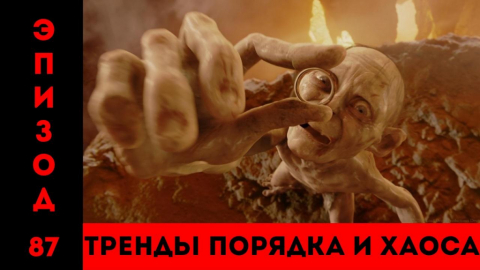 Hi everyone! Today is Friday, 6th of January, a day when all the New Year’s salads are already eaten, and we continue our podcast of trends of order and chaos”. This is episode 87. These are the main topics on past two weeks’ (due to New Year) agenda.

1. Some results of the year

The passing year has officially unveiled Russia’s fascism. The attack on Ukraine - that seemed completely insane due to its obviously suicidal nature – became a logical continuation of Putin’s previous policies. Apparently, the slogan “We can repeat it” meant to start bombing Kiev at 4 o’clock in the morning. Well later, as Vysotsky sang “Soldiers of the group Zenter are marching through Ukraine”.

For many Russians, the beginning of the war was a total shock. But, if those who understood how Russia was steadily immersing itself in fascism started searching ways to resist, a big part of the population started searching justifications for state’s actions. Saying that they are smart, they know better. Hence, that was the only solution. And these are the same people who from childhood ages were learning that “Anything but war”.

Well, in fact “fascist” is a coursing word in Russia. No one wants to be a fascist, everyone wants to be the good guy, and psychological defenses get activated. Particularly when the state propaganda names black as white and vice versa. Old Orwell must have had a lot of hiccups on the other side, from all those people mentioning his “1984”. “War is peace”, “Freedom is slavery”.

However, a massive enthusiasm - that the state was counting on, after preparing the ground for war all those years - wasn’t engendered neither. This became particularly noticeable during mobilization. According to Forbes, after September 21, around 700 000 Russians left the country.

2. How to avoid drafting

Those who couldn’t leave the country, started hiding. Thanks to human rights initiatives, guides on what to do in case one is drafted emerged. According to those guides the best thing to do is not to take the draft note and not to appear at the draft board. We have written a lot about that in the past year.

However, as it turned out, not everyone knows about those options. Here’s a story that won’t be cited, as I know about it not from journalists, but directly. So, a young man, having received the note, called veterinarians to find out how much would a castration cost and if there is a chance to make it in a way so that they could “later restore functions”. Upon hearing the negative answer, he thought a bit and asked: “What if just one testicle?” Here the veterinarians were left astonished and wondered what problem does the pet have? Eventually, it was revealed that the young man was thinking to perform the operation on himself. What can we say? Quite unexpected way to avoid militarization, but there are less radical options.

In general, mobilization and the way its conducted become more and more an active point of tension. It shows how rotten the Russian army is, where the mobilized have to buy all the equipment at their own expense. While later, even if they don’t die at the frontline, the mobilized are expected to be beaten and humiliated, as it usually happens in any patriarchal collective, like the army. Another such patriarchal system with rigid hierarchical structure is the jail. Now, those two systems merged at war.

By the way, Putin indeed doesn’t seem like himself any more. Whether he’s abusing Botox, or it was Putin’s lookalike that was addressing the nation. This time, speaking against a wall of militaries, Putin in a way hints that no one will evade mobilization. The pretentious faces of the extras in camouflage presumably are calling for heroism. But the whole staging looks as if this is a crowd of bodyguards, covering him…from whom? From people? From the people he throws like bushwood in the fire of the war?

Although no. He doesn’t even care about the people. There must be other ways to produce new soldiers. So, the government came up with the idea that the mobilized can now freeze their sperm for free. This is how they see family values. The government instils that a family should be with a dad and a mom, and at the same time removes the dad from the family. The important thing is for the wife to be able to continue to give birth.

There are conscientious objectors, not only among mobilized, but also among the military personnel - who realized the criminal nature of the war with Ukraine. “Novaya Gazeta” interviewed and officer who refused to return to frontline. For such cases, a new article has been added to the Criminal Code - “soldier’s refusal to participate in military operations” and they face prison sentence. But we live in times where heroism doesn’t involve going to the frontline of an occupation war, carrying death and grief along. It involves resistance to all that. The same paper published stories of missing objectors.

When the agitators of WW1 were talking with soldiers, they were first and foremost discussing straightforward and familiar topics – home, the family they left behind for people in palaces who know nothing about being cold, nor the horrors of artillery shelling. No one wants to consider himself as cattle at the slaughterhouse, but it’s impossible to maintain human dignity in Russian army. So, it started with attitudes like those Bumbarash sings about.

While later – armed people, tired of the war, decided to ask the power if it’s about time for them to give that power to the sovets (councils)? And what is a council, if not self-organization to fight for your right, that anarchists talk about?

Repressions against anarchists moved from last to this year. That’s why we call for solidarity with political prisoners and activists under prosecution.

On our site you can read an interview with young guys from Chita, that were detained while writing a graffiti, and now they are charged with offenses, the one heavier than the other. “Personally, I am guided by simple human values raised to absolute. That’s freedom, equality, brotherhood. I believe that if I have a position, I can express it. I’ve been participating in actions long now. Not only in political, but also in ecological actions, for instance” – says Liuba Lizunova. “We disagree with current politics – states Alexander Snezhkov. Our government subjects us to constant repressions, we are considered aggressors by the whole world. More precisely, our government is considered aggressor. We are conducting an absolutely meaningless manslaughter on Ukrainian territory. What is its meaning? Only our authorities see a meaning in it – that is pursuing their own interests, defined in 2014, when all this was just starting”.

As the New Year is also a time for wishes, we wish freedom and peace to all our listeners. Stay positive and don’t lose hope. Putin imagines himself as the dark Lord and even ordered to forge rings that he gifted to nine participants of CIS (Commonwealth of Independent States) summit. He kept one of the rings to himself, perhaps as the “One Ring”.

Well, those who haven’t read Tolkien, most likely have seen “The Lord of the Rings”. To be honest, Putin resembles Gollum the most, with his obsession to get the “One Ring”, and as we remember it was this obsession that destroyed both the ring and him. Therefore, we wish you all to live to see the end of this horror story – next, a new story will begin, and its script, among others, will depend on how many of us will be able to have an effect in it.