There’s no need to fix the system: “Trends of order and chaos”, episode 83 (4 December) 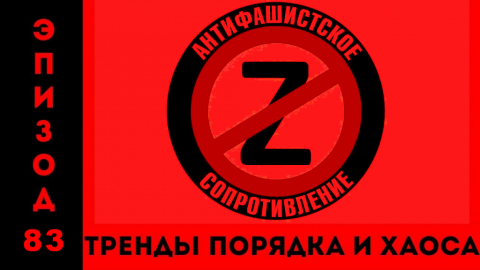 Hi everyone! Today is Sunday, 4 of December and we continue our weekly podcast “Trends of order and chaos” This is episode 83. This is what caught our attention in the past week..

1. What should the mobilized do?

In Kazan, at the 1st or 2nd of December the mobilized left in crowds the military unit and went home.

Basically, this is the best way to protest, for those who were mobilized involuntary. There shouldn’t be any demands on “better conditions”, “better weapons” and so forth. There shouldn’t be no calls to organize “voluntary groups”. You were called to participate in an unfair, imperial, predatory war. Simply refuse to fight and die for Putin’s psychosis. Simply leave. Whatever hypothetical prison terms are better than you being brought back home in pieces, after a strike of HIMARS on your cold entrenchment.

It is very important not to have illusions about the current Russian regime. It’s fascist, not in an insulting or metaphorical, but in the most direct sense of the word.  We already have legislations that criminalize LGBT propaganda to all age groups, publishing and book stores are already ordered to remove books that have any hint of “non-traditional values”.  We won’t say anything about the predatory war Russia is conducting – things are obvious here.

Understanding of the fascist nature of Kremlin’s regime is important in order to understand the recent scandal at the TV “Rain”. As we know, after the start of the war the liberal opposition channel “Rain” moved to Latvia. And in one of the broadcasts the presenter said on-air something of the sort “we hope that more soldiers could receive help – including from us – at least with the equipment or with basic necessities at the frontline.” All this was supposedly in the context of “gathering information on violations during the conduct of the criminal and pointless mobilization in Russian Federation”, as the chief editor expressed himself.

Obviously, such phrase was interpreted as a call to help Russian soldiers and caused a scandal. Even though they fired the presenter, the channel was still fined by Latvian authorities and its future in Latvia is uncertain. Of course we are not concerned with the views of any authority. But presenter’s slip of the tongue in reality shows the trend.

We see almost the same in other initiatives of the liberal opposition (for example among Navalny’s supporters). In short it could be described as “let’s fix the system”. Namely, let’s fight corruption, facilitate the imprisonment of corrupted officials, participate in Putin’s “elections”, in order to at least put somewhat decent people in local parliaments etc. In the case of “identifying violations during mobilization “this is more apparent. The intent to “identify and eliminate violations during mobilization” sounds really weird. Is the fact that it’s not being conducted flawlessly, really the problem here?

It seems that a normal person definitely wouldn’t want this mobilization to be conducted flawlessly. On the contrary, it is in the interests of anarchists and, in general, of anyone who wants freedom for Russia, for mobilization to be carried out unsuccessfully, half-heartedly, with problems, protests and to be drained of money through corruption. Because everything they didn’t steal will anyway go on rocket strikes on Ukrainian cities. And more operations will be performed under candle lights in Ukraine. More kids will die. Therefore, let Russian soldiers buy their uniforms at their own expense and wrap their feet with sanitary pads – that way their effectiveness at war will decrease.

Yes, the media can report on how mobilization is carried out, on what is going on there in general. This could even be helpful for the increase of antiwar sentiments. But this has nothing to do with “help”. It’s just informing the reader. While, this slip of a tongue regarding “help” shows that “Rain” and other liberal opposition still foster the illusion that all Russian state apparatus needs is some minor adjustments, a bit of paint, and everything will be alright.

No it won’t be. We don’t want to “fix” this system or “eliminate violations” in it. The whole Putin’s state is itself a violation of basic human rights and reason. It must be destroyed, not fixed. As they use to say in 1968, “we will not demand or ask for anything: we will come and take it”.

Antiwar protest is an actual fight against fascism in Russia, and not the “documentation of legal violations during mobilization”. We are not fans of the Ukrainian state, but if Russia’s loss in this war will help the destruction of Putin’s quasi-Reich, so let’s hope Ukrainian army will win soon. While, in order to have less casualties as possible - don’t go to the war. It’s not important whether they drag you there under contract, mobilization law or by conscription. Your presence there, during an aggressive war, in the ranks of an imperial army is dangerous for your life.

Meanwhile, interesting news: Edward Snowden, who in 2013 revealed to the world the total Internet surveillance scheme by the U.S. intelligence services, received the Russian citizenship. He was working for the NSA and was forced to flee, initially to Honk Kong, and later ask for asylum in Russia. He is still in Russia.

Usually we laugh at the phrase “everything is not that clear”, but this is really the case. Snowden did a very important deed and for very important motives. His leaks caused a major scandal and introduced certain limitations in mass internet surveillance. Apart from that, they brought encryption to public attention: the fact that today we have couple of popular messengers with a decent end-to-end encryption is largely the merit of Snowden.

At the same time his twitter shows that there are forbidden topics for him now. He doesn’t mention at all the war in Ukraine and the crimes of Russian regime, but he writes a lot about the U.S. authorities. And he’s on point. But, it’s not surprising that there are many snide questions regarding his love for Putin or “Edward, when are you going to the front?” in the comments.

It’s understandable that Snowden has little choice. His American passport has been revoked. In U.S or any other ally country, he is facing a life sentence. In reality, he’s stuck in Russia and, of course, risks to be send to USA, in exchange for something, the moment he says something against Putin. Namely, he is useful to Kremlin, as long as he doesn’t criticize Putin. I highly doubt it that Snowden condones the war in Ukraine, but he really can’t say anything about it.

You can’t envy him. And of course, it’s useful to remember that there are those not “black and white” situations, where “everything is not that clear”. Few, but they exist.

Politics grows out of economy. And even in fascists political regimes the fight of wage-workers for their rights doesn’t stop. On 25th of November Moscow's couriers of Yandex Food announced a strike for 3 days - from Friday to Sunday. The strike was supported by curriers of Voronezh, Ekaterinburg, and Saint Petersburg. Couriers protest their terrible working conditions. And they are already winning concessions on the part of the master…I mean, employer.

The “Courier” union considers that in the fight against the aggressors it is of high importance to organize and communicate activity, and also calls curriers to coordinate and write in the bot of their telegram-channel.

You order food from Yandex? Think about the fact that this person with that box on his back is also a human being, like you. Help couriers today, so that tomorrow someone else will help you when you’ll be forced to work to exhaustion. Economic conflicts are as important as antiwar protests. We should not forget them. Using this opportunity, let us remind you the project "Black list of employers" or Antijob. Write them reviews and remember that the culprit is always the one who doesn’t work but live of the labor of others.

The issue №83 was prepared by Mani