Ilya Kapustin: “When the Stamp Thudded in My Passport, It Was Like a Huge Weight Had Been Lifted from My Shoulders” 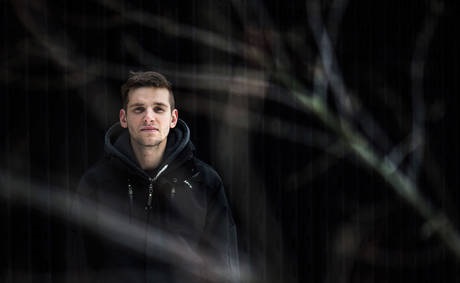 Russian Activist Ilya Kapustin, Seeking Asylum in Finland: “When the Stamp Thudded in My Passport, It Was Like a Huge Weight Had Been Lifted from My Shoulders”
Nina Järvenkylä Iltalehti
March 10, 2018

A familiar looking man sits opposite me. We have met earlier via video link, but now there are coffee cups between us.

“I now feel considerably better than in Russia,” says Ilya Kapustin, 25, but he grasps for words when I ask how things are going.

Iltalehti interviewed Kapustin in early February, just a few days after Russia’s security service, the FSB, most likely abducted and tortured him. At the time, Kapustin was still in Petersburg, and the interview was conducted via video link. Kapustin is currently in Finland. He has applied for asylum.

Kapustin is still the same quiet and slightly nervous man as when we spoke the last time.

“I feel a bit shakey. I still sleep badly and cannot get to sleep. But the situation in Russia was even worse,” Kapustin says at first.

He says he also feels sad.

“I may never return to Russia.”

“More importantly, however, there is no threat to my freedom,” he continues.

Kapustin said earlier he was not terribly politically active. Now he can speak more freely because he has left Russia. The connections with terrorism, alleged by the FSB, are absurd. Kapustin has been involved in politics, however. He has been involved in activities opposed to Putin’s regime and the dominant power structures in Russia.

Due to the trumped-charges against them, his fellow activists in Russia could be facing as many as dozens of years in prison.

Escape to Finland
Kapustin decided to escape from Russia to Finland, like many other Russian dissidents and members of minorities have done in recent times.

In an interview with Yle, Esko Repo, head of the Finnish Migration Service’s asylum, said that as a whole it was a matter of hundreds of Russians who had applied for asylum in Finland. In 2016, the number was 192, and last year it was over 400. Repo told Yle there had been 73 applications since the beginning of the year.

Last year, 21 Russians had their applications approved, and 12 of these were asylum seekers.

Kapustin traveled to Finland in a quite ordinary  way. He bought a ticket for one of the minibuses that circulate often between Finland and Russia. The mode of travel was humdrum albeit nerve-wracking in Kapustin’s circumstances.

“At the border, one man was questioned for fifteen minutes,” Kapustin recounts how things went on the Russian side of the frontier.

He was afraid that he, too, would end up being grilled by officials. Luck was on his side, however.

“I noticed a second queue had been opened at the border checkpoint. I quickly moved over to it.”

“When the stamp thudded in my passport and the trip continued on the Finnish side, it was like a huge weight had been lifted from my shoulders,” Kapustin says.

Ilya Kapustin is now trying to put his life together in Finland. Photo by Pasi Liesimaa. Courtesy of Iltalehti

“My Mind Was Playing Tricks on Me”
Just a day before his escape, their minds had been playing tricks on Kapustin and his loved ones.

Kapustin fled to Finland as soon as his visa was ready. The last night at his sister’s home had been excruciating, however. Kapustin can now smile at what happened, but that night nearly a month ago was as frightening living through a nightmare.

A minivan with dark-tinted windows was parked on the street in front of his sister’s flat. His sister and her husband did not recognize the vehicle, but it was quite reminiscent of the one in which Kapustin had been kidnapped and tortured in January.

“I was really afraid. I immediately packed my belongings and left their place in the morning,” Kapustin recounts.

It later transpired the vehicle parked in the street was owned by his sister’s neighbor.

“He had bought a new vehicle,” Kapustin laughs.

“My mind, however, was playing tricks on me, because I was really afraid at the time. Until I arrived in Finland I wondered who was in the vehicle lest they do anything to my sister’s family.”

Kapustin’s loved ones are under surveillance in Russia. For example, his brother-in-law’s VK social network page has been hacked. He had posted several articles about Kapustin’s case on his page.

“The [hackers] posted only a single link on the page. It led to the site of a well-known reality TV show,” Kapustin says.

In the event, the ludicrous part was that the reality TV show in question, Dom 2, had been hosted by TV presenter and Russian presidential candidate Ksenia Sobchak. Kapustin regards the hack as bad police humor.

“They wanted to show us they can do whatever they like.”

Life in Finland
Kapustin’s parents and his sister and her family still live in Petersburg. The family urged Kapustin to flee after he had been abducted and tortured. Nevertheless, Kapustin told them about his escape only after he had arrived in Finland.

“Mom ordered me to leave, but I didn’t tell them ahead of time [when I was leaving] just in case.”

His parents and sister know about the events that led to the escape, but Kapustin did not tell them all the details. He believes the authorities will not go after his family.

“I’m not so interesting to them (the FSB),” he conjectures.

His life is in Finland now. Kapustin worked as an industrial climber in Russia and hopes he can find similar work in Finland.

He understands the training he received in Russia is not necessarily valid in Finland and is prepared to study and do other work.

And how will he deal emotionally with the waiting, with going through the asylum application process, and coming to grips with the ways of a new society?

“I’m trying to think of it as an adventure so I can move forward. It is an episode in my life I’ll remember, and now I can remember it as a free man and not in prison,” Kapustin reflects.

Translated, from the Finnish, by the Russian Reader. Thanks to Comrade AR for the heads-up.