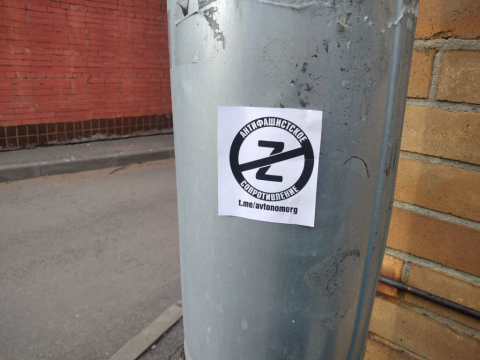 Possibilities to protest in Russia were already significantly limited before the pandemic, and during the last two years, from March 2020 to Russian attack to Ukraine, street demonstrations have been banned with the pretext of the Covid Pandemic. People were demonstrating persecutions against opposition leader Alexey Navalnyi, and in few other cases, but these ended in massive arrests. But still, there was freedom of speech in social networks, some relatively free medias remained, authorities were making concessions with some local conflicts, such as defence of local green areas from forest clearance.

After the war began, Russians were protesting with any available means – mass street protests, individual protest by putting messages to windows and balconies, on cards, to clothes (such as peace signs or other anti-war symbols, or symbols of Ukraine), individual pickets, performances, and petitions. Dozens of professions gathered tens of thousands of signatures from their own field with calls to stop the war. But the state implemented new repressive measures to crush protest: short jail sentences, fines and felony cases were opened with the most ridiculous reasons. In March, the biggest oppositional media was shut down, and censorship was imposed on the regional media. More than 200 outlets are not functioning as before. Remaining media is under threat of liquidation, so they either stop coverage of the war, or are just repeating propaganda cliches.

Between 24th and 28th of February, more than 6440 people were detained in anti-war actions. Some of the detained were passers-by, who happened to be at the spot of protests by accident, and were arrested without any symbols or placates. Courts are making decisions on misdemeanor cases in 3 or 10 minutes, and are just filling the templates for identical sentences. During the first month of protests, more than 15 000 were detained, and courts are still handling the cases. Mediazona and OVD-Info are monitoring the anti-war actions.

Since 5th of March, so called “war against fakes” has been in effect. This law bans “spreading of false information”,  “discreditation of Russian army” and “calling for economic sanctions”. Possible consequences are fines from 100 000 to 1.5 million (1000 – 15000 euros), or a prison sentence of up to 3 years – or 10 years, in case this activity is considered politically motivated. Journalists, activists and random citizens who are publishing news about the war are persecuted according to this law. Charges of “vandalism” are pressed for graffiti, which can carry a prison sentence of up to 3 years. Repeated arrests in protest action is fined with 300 000 rubles (3000 euros), which is around 3 times the average salary in Moscow, where salaries are significantly higher than in other regions.

In schools, teachers are facing unprecedented pressure due to issues relating to covering the topic of the “special operation”, and discussions with pupils in framework of the classes. During February-March schools were receiving on average two or three materials with the task to carry out propagandistic lessons. A number of teachers who refused to organise these classes, or voiced anti-war ideas, were dismissed or forced to quit. Some had to move abroad due to threats of criminal cases. A teacher from Penza is facing felony charges due to “discreditation of Russian army” due to emotional comments in class on the reasons of the economic sanctions against Russia.

In the middle of March, two paramedics were arrested for a graffiti “War is a requiem of common sense”, and other anti-war graffiti. The activists are under house arrest. After threats were made against their relatives, both confessed. In Russia, it is not possible to declare joining in protest action without confessing to a crime. In Russian court practice, it is not possible to take responsibility without a confession and “regretting”. That is, it is not possible to declare in court, that “I did this, but I do not think it is a crime and I do not confess myself as culpable”. Due to this, activists are always refusing confessing, whenever it is possible (1, 2).

In Kasimov of Ryazan region, a journalist from Moscow and a local inhabitant are accused of vandalism for spray painting “Putin get out” on a statue of Lenin. The arrested were tortured in order to force them to confess. Local communists were not protesting against the graffiti. In police interrogation, the suspects commented that the graffiti they made is street art, and it is pure imagination of the police that it would have subversive contents.

In the end of March, due to growing repression, collective anti-war actions went into decline. Now individual forms of protests began to dominate — graffiti on walls and fences, and other artistic forms of protest.  Felony investigations are still opened due to «fake information» on the most insignificant cases, and there is a huge lack of human rights lawyers willing and qualified to work with these cases.

During the latest protests, people were arrested simply with placates «Peace», «No», empty pieces of paper, placates where word «war» was replaced with *'s, quotes from the bible and constitution and air balloons with colors of the Ukrainian flag. Through all this absurdity the police were filing protocols on «discrediting Russian army». Detentions resulted in fines or short prison sentences. Between 16th and 18th of April, in various cities of Russia more than 100 people who joined lone pickets were arrested.

Anarchist Black Cross of Moscow is working together with human rights initiatives and student movements to support those, who have been facing repression. We may not always share information about concrete activists whom we are supporting, as a suspicion of participation to a «political community» may result in more serious felony charges pressed against the suspects. In some cases, relatives of the repressed are sabotaging our efforts to contact them under house arrest or remand prison.

We have supported two vegan activists, who were spreading leaflets in the metro, to escape from Russia. Their flats were searched, and agitational material was discovered. As these activists were involved in many projects, they decided to temporarily leave Russia. As we got many donations during the last two months, we channeled part of them to the student paper Doxa, which is spreading information about anti-war protests. Doxa is also paying fines of some of the detained, who are in a dire financial situation. We also provided some of our funds to an online project, which provides a webpage for anonymous correspondence with political prisoners.

We have paid for food parcels of actionist artist Pavel Krisevich, who has already spent 9 months in Butyrka remand prison due to his actions against political repressions.

Crimean anarchist Evgeniy Karakashev has already spent more than three years in prison, sentenced for his political activism, and now while in prison, he has also been charged with «discreditation of the armed forces of the Russian Federation», which is a misdemeanor. Prison administration claims that he voiced a negative opinion about the «Russian special operation» in the presence of prison administration. This is the first case when this new criminal statute has been applied in prison. Now authorities want to send Karakašev to an even harsher prison as a «repeated offender against prison discipline». Moscow ABC has provided Karakashev a lawyer to challenge this attempt.

ABC Moscow is also supporting food parcels to another of the accused of «preparing hooliganism» in Moscow. Two men were arrested in the center of Moscow, close to an anti-war action. According to prosecution, they were armed with Molotov cocktails. Another one of the arrested grew up in an institution, and has no lawyers. We do not yet have a detailed information about this case, and there has been only a little information in the media.

Please also support Anastasiya Levashova, who was sentenced to 2 years in prison colony for throwing a molotov cocktail at police in the first day of the Russian attack against Ukraine 24th of February 2022, her current address in prison is Levashova Anastasiya Mikhaylovna, 1999 g.r. ul. Shosseynaya 92, SIZO-6 109383 Moscow Russia This is address for remand prison, but she is likely to be sent to a prison colony soon. Please write all messages in Russian. You can use google translate, or other automatic translation services for this.

More than 300 000 people have left Russia due to threats of arrest, uninterest to pay taxes or going to army. Amongst them, there are many anti-authoritarian activists. Many of those who emigrated are still supporting activists in Russia, for example those who have faced consequences due to their anti-war opinions in their workplaces. Antijob.net is providing legal support for these people.