Tyumen: people fall under the KAMAZ trucks in the fight against the barbaric construction 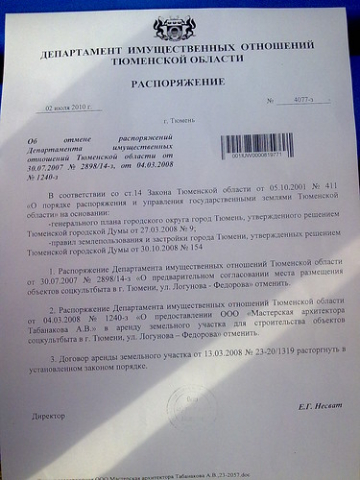 In Tyumen the confrontation on the street dwellers Logunov and businessmen who supported the city administration decided to build an office building directly on the site of the green zone. Yesterday, 23 June, there took place gathering of tenants who are unhappy with the construction of new office building on-site garden and playground. After listening to the officials who confessed to ban the construction of powerlessness, people realized that the only formal ways nothing will not achieve. And decided atchange more directly. Today at 8:00 am at the main gate is on duty a few people: four local residents and about the same activists of Autonomous Action - Tyumen ". Began to drive KAMAZ stayed close, realizing that the passage is closed at a construction site crane stirred awake lazily began to pull something with an iron hand excavator.

At this time the representatives of the initiative group of residents came out the general contractor, very unhappy that his vehicle is idle.He showed me a building permit, the lease of land and building plans, accusing packaged that stand on the roadway they are illegal. Wrangled a long time, young people, meanwhile uncovered guitar, and disputes have continued under the inspiring accompaniment. At this time, the builders decided to make a feint, and opened the side gate. Activists reacted instantly: KAMAZ was stopped by one of the most decisive and swift anarchists ... And then lay across the road and local.

This whole theater of the absurd from the windows of the neighboring low-rise building (rumored to be owned by the developer - Tabanakova) observed some people; contractor periodically talking to someone on the phone ...and working peacefully stood aside, it seems, did not upset the temporary lack of work. ... On the battlefield periodically appeared memorable appearance man, refuses to submit.What, however, did not prevent him from his anonymous person to try to exclude the presence of journalists to shoot the construction site: "This is a particular object that is not right!", And activists - block the passage. Finally, arrived and police. Two or three uniformed officers and a man in civilian clothes, who introduced the district, again, quite peaceful and very long conversation with the audience, urging them not to engage in arbitrariness.Residents were not shy, and was told that they are not here illegally, and in accordance with the decision of yesterday's gathering. A picket and not to let vehicles advised them nor anyone other than himself deputy Zakharov. "We're not only here picketing, we operate by legal means! Sue!" The police sighed: "Yes, the proceedings would go a long time. What will be here a month or two to stand all day? Yes can not!" "And three can, if need be!" - Answered them. In the meantime, was the fourth hour of confrontation. The main gates were still locked, but when the second passage were released, broke up about his business, young people with guitars, equipment began the same work.Stop it already does not have. By lunchtime, the people departed: wait for news of which went to official thorny path. Returning reported that the mayor of Tyumen ordered to suspend construction. However, faith without him there is no documentary evidence. So the struggle continues.

BP-Tyumen Additionally publish a report from one of the Tyumen free sites :

He actually stood in front of nose of the truck and did not let Kamaz at the construction site.The driver got out and calmly said: "Do not worry, Grandpa, man, I will not crush." Veteran in 1983, he fought in the Great Patriotic War in 1944. Fearless preserved for life. Beside him stood several women and adolescents. They organized a picket. Police arrived. Women explained that the decision to perform the yesterday's meeting and informed about these actions, deputy Zakharov and of the council of the Eastern District. Police stood by and more in conflict did not interfere.The policeman asked to go to court, not to engage in arbitrariness, but behaved politely and never threatened. At the gates of accumulated queue of trucks. Dragger off the motor. This lasted about two hours. All this time, the representative of the general contractor was talking with people. Other leaders of construction retreated farther and all the time someone called. Then the excavator began to shovel earth again. Cars drove on the territory of the park by another gate.Construction resumed. People, however, told me that they will continue protest actions at the same time will prepare to go to court and other official bodies. We see that the power persists in its wrong. The authorities are hateful to him by residents of neighboring houses. The veteran told me sore: "We built it to kindergarten, I would not mind, but with komersantami - invaders who only have a pocket to stuff, then at least the grass does not grow, I will fight!".Invaders - a veteran correctly and accurately described those who sold the territory of the future city park entrepreneur Tabanakova. The image of the invaders representatives of the government formed in the minds of people without the help of journalists. People look at the government's actions and understand that the town was occupied by a handful of businessmen and officials. But hope remains for the governor. Veteran long inquiring I like to call the governor. It seems he had two days of his one-room apartment is trying to call. Its all send and send.He listed five addresses me where he was sent to the secretaries in the different receivers. But contact with the governor and not allowed. At the gate to the construction site is on duty one more veteran - the Afghan war. Yesterday I saw him in a blue beret and decorations. One of the orders - the Order of Alexander Nevsky. They call him Viktor Krokhin. He stopped the Kamaz three days ago. But then Krokhin was one. Now two of them. A partisan citizens 5 th district two brave soldiers. And they are not hiding in forests. Separately, a few words about the Tyumen youth.Today at the gate at 8 am on duty as the boys and girls from the "autonomous action". Kamaz They did not stop, but simply singing songs. [Note: AD-Tyumen: the author has incorrect information, we stopped Kamaz vehicles, even as] They saw Oleg T., and went out into the street. Went out and stood as the wall.