14 antifa were lawlessly arrested by Special Police Forces, examined and tortured by members of Anti-extremism Department 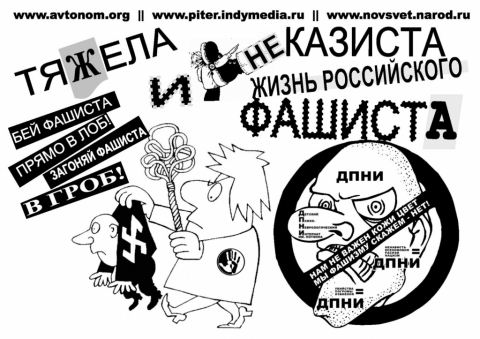 1 of May in Nizhny Novgorod became a real show-off of police brutality.
At 10 a.m. group of antifa were arrested by police officers at the Minin's square, took to the police division and called in question by members of Antiextremism Department. One of the members of Anti-extremism Department told the detained, that he don't give a damn for his rights and he's ready to wipe his ass with constitution. Detained were charged with unsanctioned action. But no action was there, those guys were going to take part in legal demonstration, which traditionally is held by the Left on Minin's square at 1 of May.
<

br /> According to words of detained they were not explained why they were arrested: when one of the guys tried to ask surname and certificate of those, who being arrested him, they began to beat him. Young people were taken to police division, where they were exposed to bashing and scorn at first by members of Special Police Forces and then arrived to the place members of Anti-extremism Department.

At first detained were made to crouch, holding hands on the nape and bended neck, every attempt to change the position was broken by beating, they were chained by handcuffs and were beaten through reefing-jackets (not to leave fruises). Also they were made to do push-ups, when policemen stood on their hands, abusing them with antisemitic, homophobic and fascist speaking.

Then members of Anti-extremism Department arrived. All scorns of SPF seemd to detained "not so brutal".

- One of antifa were beaten in the kidney area through reefing-jackets, when they understood that it had no results, they roped him and covered with reefing-jackets. Two people sat on him and kept him in this position for a half an hour. He was demanded to sign a pact of cooperation with Anti-extremism Department, after 2 hours he had to told that he agree. He was made to tell to the camera, that he organised might-have-been attack on nazis.

- One of antifa was shown that in this police division is detained nazi (he was served generously, he wasn't tortured, just fixing data, lift fingerprints). He was called by nickname, which is known among nazis, he was threatened, that his adress will be told to nazis.

However, at police division there was well-known in Nizhny Novgorod neonazi. In the street, when antifa were being arrested, he captured them on video. This person is member of Movement Against Illegal Immigration (DPNI). He was friend of Sergey Ionnikov "Onix", that had been charged with kindling hatred and now charged with murder of young person from Nizhny Novgorod.

It make us think, that DPNI is used by Anti-extremism Department as provocators.

Antifa were freed after 5 hours. They got administrative fine for "swearwords".

One of the detained after beating could hardly go. Now his is at home.