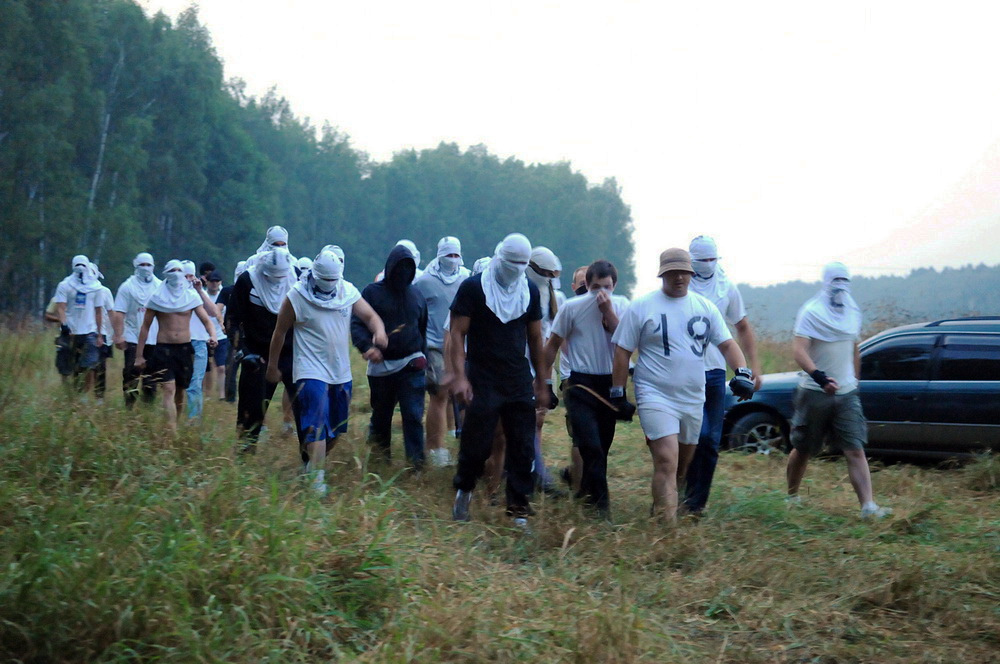 At this moment, Russia's antifascist, anarchist and environmentalist movements are in great need of international solidarity.
As Moscow is choking from wildfires, the forests around the city are being chopped down. An oak forest near Khimki, a town just north of Russia's capital, is a deliberate target of those who wish to make money on a new toll motorway between Moscow and St.Petersburg. The planned motorway makes a detour through the previously protected forest. Motorist groups say this will actually slow the traffic down, yet increase profits for local authorities which will benefit from turning the wooded area over to elite housing and shopping centres.

Khimki residents have been fighting an uphill battle against local and federal authorities to prevent the project. At least one local journalist was killed, and another, an editor of a local newspaper, maimed in an attempted assassination attack which the police did not bother to investigate.
As the chopping down operation started for good this summer, environmentalist protesters were attacked with varying degrees of brutality by security guards, riot police and hired thugs from neo-Nazi football hooligan gangs.
On July 28, 2010, a crowd of about 300 antifas, punks and anarchists have gathered in Moscow for an open-air gig to support the Khimki forest protests which was to feature some local hardcore and hip hop bands. Instead of this, they took a commuter train to Khimki where they marched to the Khimki town hall, chanting slogans in support of the forest, surrounded by enthusiastic crowds of locals. The town hall was empty, and the crowd smashed a door, a few windows and left some graffiti. Police simply ran away when they saw the crowd, as most of their forces were concentrated in the forest to prevent any hindrance with the chopping down of the trees. The crowd then travelled back to Moscow, and no arrests were made at the scene.
The repressions came later, when two activists were arrested. Collective Action Institute researcher, anarchist Alexey Gaskarov, went to Khimki to watch the action as part of his research into protest movements in Russia. Antifa activist Maxim Solopov discussed the action in Khimki with the popular Ekho Moskvy radio station.

Moscow Region police thought that this was sufficient grounds to detain them, as they were under immence pressure to find someone, anyone, as the public opinion polls have shown that 80 to 90 per cent of the public supported the action in Khimki - which only involved property damage, and pretty minor at that.
After the court struggled to find legal grounds to hold the two men, after police extended pressure on the lawyers who defended them, after no proof whatsoever of either Gaskarov's or Solopov's involvement in the violence was produced, it is clear that both are but hostages held to prevent further disturbances. They face up to seven years in prison on aggravated hooliganism charges.
The repressions are ongoing. About two dozen reporters and photographers were detained, sometimes with the use of riot police, as the police search for evidence. Khimki environmentalist leader Yevgeniya Chirikova was repeatedly arrested by the police, in circumstances which could only be described as kidnapping, and fined for allegedly organising protests - which she said she did not support but found inevitable after the authorities refused any sort of dialogue.
A number of peaceful actions in support of the arrested activists were held in Russia, Ukraine, Belarus and Finland. There is only so much that we can do locally, and as there are international investors involved in the funding of the motorway, putting pressure on them may well change situation for the better. Send protest letters to Russian embassies in your country, hold pickets and rallies, spread the word - do whatever you can. We need your help to save the forest - and save our comrades.
"On arrests after direct action in Khimki 28th of July"
avtonom.org/en/node/12872
"Moscow / Khimki: The Battle with the Adminstration Heats Up"
cia.bzzz.net/moscow_khimki_the_battle_with_the_adminstration_heats_up
"Why we need solidarity with Russian environmentalists and antifascists"
www.aktivism.info/socialforumjourney/?p=1748 (also includes links to online petitions and more information)
www.facebook.com/home.php?#!/group.php?gid=123233894390151
(regularly updated links with news updates in English)