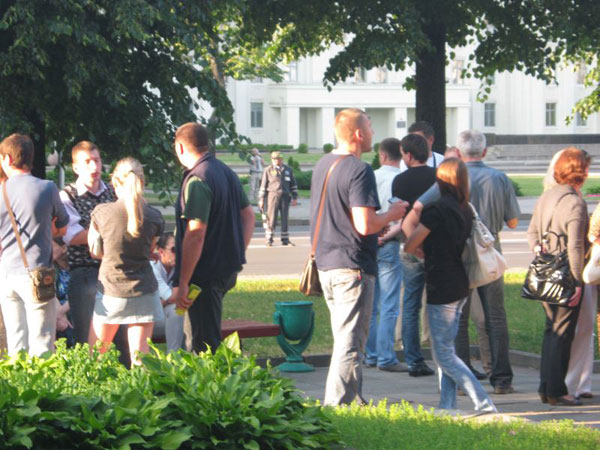 The situation in Belarus is now getting closer to the one that was during the elections in December 2010 but now it seems to be more massive and popular.

After the elections the economy collapsed without Russian dotations. The local currency devaluated almost thrice. Therefore the national bank limited the operations with foreign currencies wich led to smaller banks' collapses, blocking currency accounts and cards and long lines before the currency exschange points similar to those for toilet paper and bread in the Soviet Union. The prices for most of the goods went up by 100%. The big and small businesses that where dealing with import are closing down as they can't buy the currency. Imported cigarettes, hygiene goods, etc. have disappered. The petrol prices went up and limitations were imposed on buying it for one car.

Social unrest grows and some groups already let their steam off.

Thus, on June 7 a second action "Stop Petrol!" was held by motorists in Minsk and other cities of Belarus. They blocked the central avenues with their cars as a protest against growing prices on the fuel. On the whole 1600 participants took part in the action.
Video is here http://nn.by/?c=ar&i=55425

Thus, on June 12 a border crossing with Poland was blocked by the people (about 200) who sell petrol and other cheap goods to Poland which is sometimes their only way of earning money. This happened after the border patrolrefused to let them cross the border.
Video is here http://nn.by/?c=ar&i=55641

On June 13 the same action happened on another border crossing. About 50 people came to protest.
Video is here http://nn.by/?c=ar&i=55712

Meantime, the notion of the "Silent revolution" came out as a possibility to protest without being detained. The idea is to gather at the central square of the city every Wednesday without any party symbols, flags and slogans and just stand or walk up and down silently. When the number of the people gets to a critical point people can start real protests. the actions are organised through social networks. The first action was ignored by the authority, journalists and most of the population. The next week action (June 15) counted more than 1.500 in Minsk and about a 1000 in other cities. 240 people were detained, just for standing and clapping hands.
Video and pics: http://nn.by/?c=ar&i=55856

Lukashenko condemned the action and on June 21 passed the law that forbids any mass gatherings at central squares of the city.

The action that took place yesterday, on June 22, gathered twice as many people throughout the country and about 450 were detained and beaten up. Pics of detains taken one after another http://nn.by/?c=ar&i=56237
More pics http://news.tut.by/politics/231928.html Video http://nn.by/?c=ar&i=56238
People detained during the actions are mostly fined with the sum equal to their monthly salary, but the public raised money for most of them, others received money from a right-watch organisation.