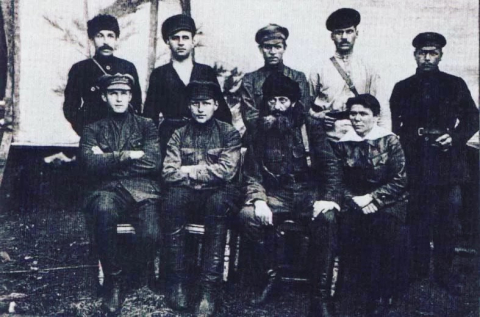 The revolutionary events at the beginning of the last century, and the following civil war, did not leave Siberia unaffected. One of the key, dramatic events at that time unfolded in Irkutsk; as well as the December battles of 1917 and 1919, the partisan war, foreign intervention, and the arrest and execution of the White movement’s leader, A.V. Kolchak.

The main forces of the civil war are considered to be the “Whites” and the “Reds”, but little is said about the participation of anarchists in the fight for freedom.

During December battles with the cadets, the participation of a Caucasian division under the command of Nestor Kalandarishvili is mentioned. His division was occupying positions along Angara’s waterfront, from the pontoon bridge to the White House. The reason for such development was the confrontation between MRC (Military Revolutionary Committee) and the state Duma, the majority of which was comprised of Esers (Socialist Revolutionary party). On the 18th of December, with Order No. 1, MRC required cadets and Cossacks to disarm by 14 o’clock on the 21st of December. As a result, the cadets revolted.

After the December battles, Irkutsk Soviet tasked Kalandarishvili with forming a cavalry division. The commanders of its three squadrons became Stepan Krasev - a miner from Cheremkhovo; the former yesaul from Kuban in exile Alexander Kozhan, and a former convict, robber Amzor Karaev. All three were anarchists. The overall command was carried out by Kalandarishvili.

In April 1918, counting around 500 sabers, the division arrived to Transbaikal front, to fight against ataman Semyonov.

Anarchist miners from Cheremkhovo were exchanging produce with Buryat villages. The main “lobbyist” among Buryats was the anarchist Pavel Baltakhinov, who with the arrival of the Whites became a guerilla - among others, alongside Kalandarishvili. Once in Mongolia, he spread ideas of anarchism among Mongols.

In 1918, during the offensive of the White army and the Czecho-Slovak corps, anarchists took part in the defense against Pepelyayev’s army at Zima station, in collaboration with the Reds.

In 1919 Kalandarishvili’s unit was based at Kitoy’s basin, 70 kilometers to the west of Irkutsk. In the summer of the same year, anarchist partisans blew up several bridges and derailed 8 echelons. In September, they attacked Alexandrov central prison and freed 580 convicts.

Thousands of workers and peasants were fighting under the black flags for free life and labor. Their ideas are alive and relevant to this day.