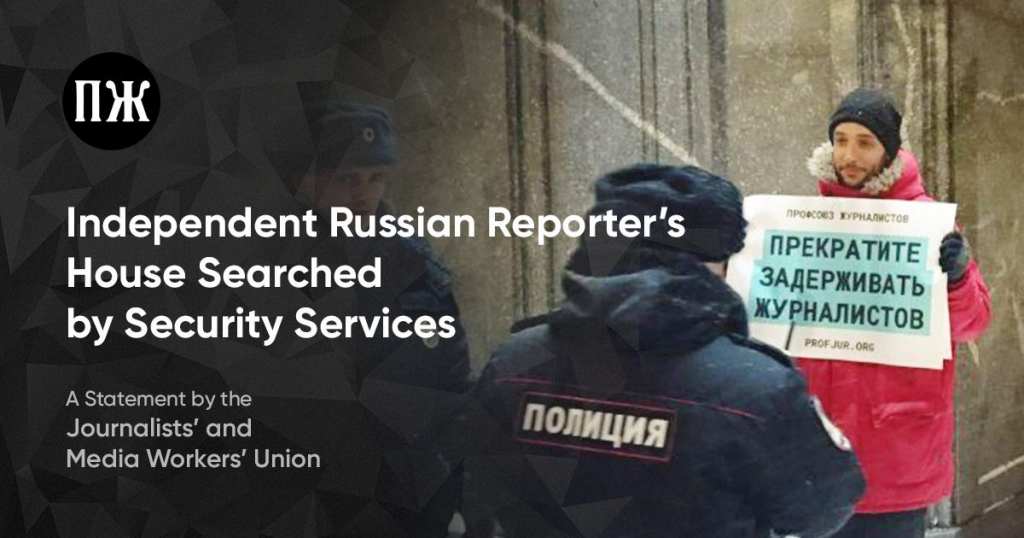 A Statement by the Journalists’ and Media Workers’ Union

In the early hours of January 31st, Russian security services stormed the apartment of @Pavel Nikulin, a co-chair of the Journalists' and Media Workers' Union. We can assume that Pavel’s apartment was searched in connection with an article he wrote for the New Times magazine in March 2017. The article, titled “From Kaluga With Jihad," was removed from the magazine's website after a court found it was "publicly justifying terrorism."

Nikulin’s attorney says Pavel had been summoned as a witness in a case based on article 205.3 of Russia’s criminal code: “undergoing training for terrorist purposes.”
All of Nikulin’s electronic devices were seized by the authorities, along with copies of moloko+, a zine Nikulin edited and published, as well as some T-shirts bearing the magazine’s logo — items with no conceivable connection to the “Kaluga terrorist” case.

We don’t believe in coincidences. Just a day before this incident Pavel picketed the headquarters of FSB, Russia’s largest domestic security agency, to protest against the detention of fellow reporters Sasha Bogino and David Frenkel in Saint Petersburg. Bogino and Frenkel were barred from covering the trial of Igor Shishkin, a prominent anti-fascist activist (https://goo.gl/5p39D3). They were later detained for attempting to gain access to the courtroom, in a clear violation of Russia’s own media law which guarantees reporters access to state institutions.

The Union believes that being designated a witness in a terrorism case is a direct threat against a reporter to prevent them from carrying out their professional and public duties. We are convinced that yet another case of harassment against journalists by Russian security services has only goal in mind: to silence, to force into self-censorship, to avoid covering “risky” subjects and voicing stance on civic issues.

We demand that the harassment of journalists is ceased immediately and will do everything in our power to secure the release of Pavel Nikulin from detention so that he can safely resume his professional activities as a reporter.