Ivan Astashin: Violence Is the Norm 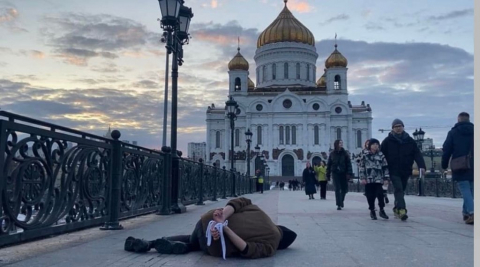 I’m not surprised by the violence. I am not surprised because I know about the violence that occurs in Russia every day. Senseless cruelty is seemingly the norm for some Russians. I don’t have a ready answer to why this is the case. It’s worth asking sociologists, anthropologists, and psychologists for an explanation.

Those of you who were born in the early 1990s or earlier probably know about the brutal executions, tortures, and rapes of the Chechen population by Russian soldiers. Some of you will say that the Chechen militants were cruel too. Yes, they were. But it is always worth remembering that it was the Russian troops who invaded Chechnya, and not vice versa. Another big question is who was the first to employ torture and execute the so-called enemy using elaborate methods. To refresh your memory of those events, I would remind you of several well-known cases. The bombing of Katyr-Yurt. The murder of six dozen civilians in Novy Aldy by the Petersburg riot police. The abduction, rape, and murder of the 18-year-old Chechen girl Elza Kungayeva by Colonel Yuri Budanov. In addition, human rights defenders, journalists, and the European Court of Human Rights have reliably verified a huge number of abductions and the cruelest tortures of Chechens by Russian forces.

I remember the first time I found out about these tortures at school. A classmate told me that his brother had “fought” in Chechnya and brought back a videotape showing the torture of local residents. I didn’t watch the tape: what my classmate told me sufficed. A few years later, in the ninth grade, I met a Chechen boy my age, who told me about similar tortures to which his relatives had been subjected. I was told the same thing about men who had been involved in the Chechen campaign whom I met in prison. Only Chechens themselves do not like talking about the torture and rapes; therefore, the information found in open sources details only a small portion of the crimes committed by the Russian security forces in Chechnya.

In addition to war, there is also quite enough cruelty (sadism, I would even say) both in the army and outside it. By the way, it is quite logical that since Russian soldiers bully and actually torture their fellow soldiers, they would not have any moral barriers vis-a-vis the enemy and the “enemy” civilian population. The infamous story of Private Andrei Sychev, who was tortured by his mates on the occasion of the New Year, is an eloquent illustration of relations within the army.

As probably everyone knows now, there are whole torture “conveyor belts” in the Russian penitentiary system. In such places, prisoners are tortured with extreme cruelty. And, it seems, with a particular relish. They are tortured both by Federal Penitentiary Service employees and by other prisoners who have signed contracts with the wardens. They torture and rape prisoners, and sometimes they kill them. Moreover, this goes on in both adult and juvenile penitentiaries.

And the cops? They also enjoy torturing, beating, and, on occasion, raping detainees in police departments.

However, cruelty is found not only among the security forces. Due to the fact that I was reputed to be a “lawyer” in the penal colony, many prisoners brought their verdicts to me to “have a look.” I wish I hadn’t seen them. Out of greed, in a drunken stupor or out of fear, these seemingly utterly ordinary people had done terrible things. I also remember the stories of some of my inmate friends about how their fathers had “raised” them. “My dad beat me with a stick.” “Mine whacked the fucking hell out of me with a hose.”

As for these last arguments, you might counter me by saying that they are criminals from difficult backgrounds. Perhaps. What about domestic violence? According to the Consortium of Women’s Non-Governmental Associations, at least five thousand women were killed as a result of domestic violence [in Russia] in 2018 alone.

Once in power (whether as conferred by epaulettes or as the “head of the family”) and believing in their impunity, many, many people in Russia become executioners, sadists, and rapists. And if this is also bolstered by xenophobic propaganda and strong alcohol, the monsters begin doing the unimaginable. Since the regime in Russia gives some people the authority to inflict whatever they want on those in their jurisdictions, and forces others to go along and not to rebel, violence becomes commonplace.

Now it has spilled out of Russia. The whole world has now seen what had been happening on the sly during “counter-terrorist operations,” in police departments, in secret prisons and the Federal Penitentiary Service’s unclassified institutions, and in the army, as well as on the streets and in home. [Bucha] is undoubtedly a terrible tragedy and a huge grief for the victims and all decent people. But I hope that over time it will lead to society’s re-examining the policy of giving people uncontrolled power. Ridding the world of violence seems to be an almost unmanageable task, but I think that when Russia doesn’t have policemen who “Putin told to beat the holy fuck” out of someone, when it doesn’t have military men whose crimes will be “written off by the war,” when it doesn’t have security officers who “defend the motherland,” and when there is no support in society for patriarchy, racism, and xenophobia, there will be much less violence.