June 7 in Moscow in a park near the headquarters of Railways held a rally against the sanctioned undo near Moscow electric trains. Mass cancellation of electric trains create a stampede in the suburban trains themselves and at the exit, people watch can not get to work and study. In the course of action was also competition for the best "rabbit ears". At the rally organizers, the participants of the initiative group of Zelenograd (Moscow region, located about 50 km of the Oktyabrskaya Railroad) exhibited CFR requirements, joined by the passengers who came to rally other areas near Moscow, as well as sympathizers of Muscovites.

3. Disable the controllers to keep people on the platform;

4. A separate path for "Sapsan"

5. Minimize the "simple" electric trains between stations during the passage Sapsan;

7. restore the cheap train from Moscow to St. Petersburg "Youth" with stops in regional centers of Tver and Novgorod regions.

8.To repair life-threatening platforms and bridges.

10. Repairing road at night, not during the day

Their demands by the protesters sent directly to the JSC "RZD". Also during the protest was signed by an appeal to the mayor of the capital with a request to influence the policy of JSC "RZD", because a lot of people working in Moscow, on a daily basis have to get to their jobs from Podmoskvovya on trains.

"Over the past two years, prices for travel took off a few times, and the quality of service has only worsened! Many bridges, crossings and platforms are a danger to life and health.Schedule of EMUs often does not correspond to their actual arrival, and we see every day a new list of cancellations. Turnstiles at the Leningrad station break every day, creating a stampede and queues. Monitors, obstructing passage on a platform at some stations, force us to face danger, jumping across the tracks to get to school and work.Because it is often impossible to buy a ticket because of long queues and a half of idle cash registers. But after the appointment of trains "Peregrine" the situation has worsened in many times! In small towns ambulances "can not get to patients because of the 30-minute overlap railways, separating the city into halves. Train with a simple working people stand for half an hour between stations, passing trains elite peregrine, bringing huge profits Railways - the organizers of the invitation to the meeting.

It's no secret that this policy Railways towards other passengers had already led to the population of Tver and Leningrad regions, through which the route passes "Sapsan, announced an elite train real guerrilla war, pelting it with stones and podkladyvaya in the way of foreign objects.

Organizers of the rally urged disaffected to go another way."We urge fair disaffected suburban Moscow to solve problems not by vandalism (stoning" Sapsan "etc.), but by the expression of direct democracy!" - Says the invitation to the meeting.

At a rally attended by about 30 people.In addition to the organizers of the meeting was made by a passenger electric trains direction of Kursk, who lives in Elektrogorsk and working in Moscow. Residents of this town in the far suburbs, complain permanent cancellations of already rare EMUs on Elektrogorsk branch of the main branch, especially in the mornings, when people go to work in the capital. Also, residents Elektrogorsk unhappy that the latest electric in Elektrogorsk away from Moscow in 20 hours, which significantly limits the choice of jobs in the capital.In addition, no delights passengers Kursk directions and information about the intention to put on it "Peregrine".

Moscow pensioner who has a dacha in Gigantovo (Paveletsky direction), protested against the repeal in October last year of direct electric trains to their holiday village. JSC "RZD" decided that EMU at the branch on which there are over 2000 villa plots, are unprofitable.As a result, cottagers, many of them - pensioners, have to go to their site about 3 kilometers from the railway tracks on which freight trains are regularly held. According to speaking at a rally Summer Resident, already there have been several deaths.

In addition, a pensioner demanded lower prices at least for seniors in summer season.

Passengers complained Savelovsky directions into a megaphone on the charges in ticket "exit" in which "rabbit" must buy tickets to go through the turnstiles with the platform.For example, last year at the box office Savelovsky station such ticket costs about 96 rubles: the Federal Antimonopoly Service even had (on the complaint of passengers) to go to court, to the ticket price "on the yield was lowered. Other participants in the meeting and prepare now appeal to the FAS about the repeal of electric trains: passengers believe that the JSC "RZD" abusing its monopoly position.

A resident near Moscow Pushkin passenger Yaroslavl direction, lamented the fact that now train to his home town is half an hour longer than in Soviet times.This fact explains the need to pass "Peregrine".

Management of JSC RZD originally responded to the news of the planned rally passengers: Last Friday the company's website announcement appeared that at the time at which lodged a rally in the same park will be a chess tournament. Indeed, the music accompanying the event, sometimes muffled megaphone protesters. Also, representatives of the JSC "RZD" spread among the journalists covering the rally leaflet, which stated that the problems of passenger electric trains to blame "rabbits" and the authorities of cities and regions outside Moscow, regulating prices for travel in suburban trains.

Participants of the meeting, read the leaflet, wondered why such a large company has a monopoly can not negotiate with local authorities, and why she prefers to raise ticket prices, rather than save, for example, European-quality repair of the central office or the salary guide and his official vehicle.In theirx krichalkami protesters expressed their desire to transplant the leaders of JSC "RZD" of expensive cars in the train near Moscow. 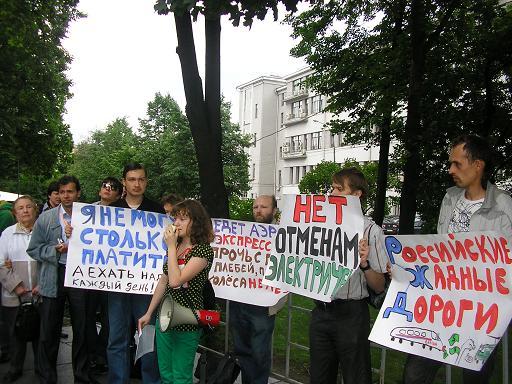