Nizhny Novgorod anti-fascists need your solidarity and support! A call for coordinated actions around the world on March 16–18, 2012 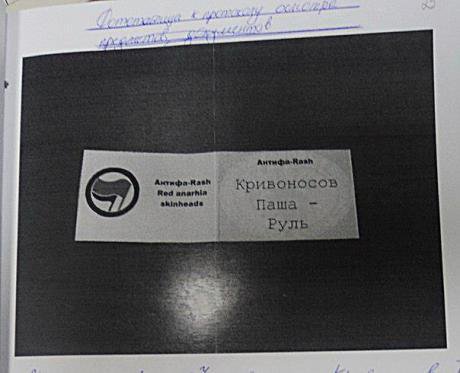 We, the anti-fascists and anarchists of Nizhny Novgorod (Russia), appeal to concerned people around the world. The political police (the Center for Combating Extremism or Center “E”) have fabricated a criminal case against our comrades. Anti-fascism has been outlawed in our city. We need your solidarity and support!

What are the charges against our friends and comrades?

Five young men, our friends, have been charged with organizing an “extremist community” under the exotic name of “Antifa-RASH.” According to our illiterate police, this strange acronym stands (in English) for “Red anarhia skinheads” [sic] and should be translated from their broken English slang into Russian as “red anarchy of skinheads” (a combination of all the fears of ordinary law-abiding citizens.) Artyom Bystrov, Albert Gainutdinov, Pavel Krivonosov, Dmitry Kolesov and Oleg Gembaruk are alleged to have formed this organization in order to carry out assaults on people espousing ultra-rightwing views and to incite hatred against them and against wealthy people.

Why do we claim that the case is fabricated?

The notorious IDs (http://a1.sphotos.ak.fbcdn.net/hphotos-ak-ash4/s320x320/404683_235085506... — this is a photograph from the police case file), which allegedly prove that the accused were involved in an extremist organization, were planted during police searches (during which a great number of procedural violations were committed, including the fact that most of the accused were altogether absent when their apartments were searched). Thus, during a police search of the apartment of one of the accused, who was not home at the time, the official witnesses (who are required to be present under Russian law) sat outside the closed door of the apartment while the police, who had entered through a window, did as they pleased in the empty apartment. The alleged IDs contain a crude spelling error (it would be odd if leftist activists had spelled the word “anarchy” wrong). The charter of this “organization,” which was likewise planted by police during these searches, stipulates a hierarchical structure, unconditional submission to the leader, and even punishment for disobedient members. These “rules” are, of course, incompatible with leftist views and with the ideals of liberty and equality that our comrades espouse.

The second part of the criminal case, which alleges violent actions against neo-Nazis, is likewise filled with fabrications and contradictions. Pavel Krivonosov and Artyom Bystrov have airtight alibis for the time when they allegedly assaulted ultra-rightists, and most of the victims did not identify them as their assailants. As for the assault on the neo-Nazi Dmitry Redkin by anti-fascists Oleg Gembaruk and Dmitry Kolesov (a charge to which both of them have honestly confessed), this was an ordinary brawl outside a bar that had nothing to do with a premeditated political action.
Why have police singled out these men for persecution?

It is in the interests of the political police to punish these men in particular. They have never made a secret of their anti-fascist, leftist and oppositional views.

Artyom Bystrov is the principal accused. Since late April, Bystrov has been under house arrest. He has been involved in Food Not Bombs (which distributes free food, clothes and medicines to the needy) for many years. Like his comrade Pavel Krivonosov, Artyom Bystrov is an anti-fascist, a leftist social activist and an environmentalist. Bystrov and Krivonosov have been involved in organizing and providing security for anti-fascist concerts, and have taken part in animal rights, environmental, anti-nuclear and anti-fascist protests.

The political police have declared that Albert Gainutdinov is not only the founder and leader of the mythical “extremist organization,” but also the creator of the web site http://streetmob.org/. Nizhny Novgorod police apparently bear a personal animosity towards this site insofar as it has exposed their crimes as well – instances where they have tortured anti-fascists, anarchists and opposition activists. At the moment, Gainutdinov has been forced into hiding: he knows perfectly well that, if arrested, he would be threatened with physical violence or torture at the hands of Center “E” police (about which they write openly in the comments section on this very same site).

Dmitry Kolesov is a musician in a hardcore group who also makes no secret of his anti-fascist convictions.

Because of his lack of experience, Oleg Gembaruk, under pressure and threats from the police, confessed to involvement not only in the fight outside the bar, but also in the mythical “extremist community” (therefore we do not help him).

The guilt of the other accused men lies precisely in the fact that they refused to agree to act as informers when police officers attempted to force them to do this during interrogations and even under torture. They are guilty of refusing to tolerate police abuse and rampant neo-Nazi violence on our streets. They are guilty of caring about the most pressing social, environmental and political issues.

How can you help?

First of all, we need your solidarity. The authorities have ignored all the outrageous violations of human rights committed by the political police, and they refuse to acknowledge the clear fabrications committed in this criminal investigation. Our only hope is the pressure of public opinion, international attention to the case, and widespread media coverage. On March 16–18, 2012, we call for days of coordinated actions in solidarity with the Nizhny Novgorod anti-fascists.

Second, we need money to pay lawyers. Alas, we are forced to turn to you for help: we need to raise at least $3,000. We would be grateful if you were able to make a personal donation to the defense fund for our comrades or hold benefits or concerts to raise money on their behalf. The first court hearing in the case has been scheduled for early March. We will be providing you with regular updates on how much money we have raised and how much money remains to be raised.

Thank you! We are counting on your solidarity and support.

News about the solidarity campaign and regular updates on the case
http://avtonom.org/nn
http://freeantifann.livejournal.com/
http://www.facebook.com/groups/215495161878537/

Where to make donations