Hi everyone! Today is Sunday, 20 of November and we continue our weekly podcast “Trends of order and chaos” This is episode 81. These are the main topics on past week’s agenda. 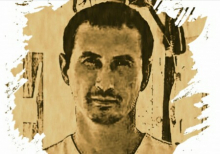 On April 19, the North Caucasian District Military Court in Rostov-on-Don convicted an anarchist from Evpatoria Yevgeny Karakashev in the case of Calls for Committing of Terrorist Activity in the Russian social network "Vkontakte".

We call for solidarity and support of Crimean anarchist Evgeny Karakashev. The collection of funds for the work of a lawyer and the payment of parcels is started. 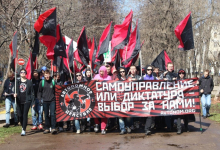 Russian authorities have upped the ante in their pressure on anarchists from “Autonomous Action” movement as of late – this includes a new prisoner charged with the Bolotnaya Square case, Dmitry Buchenkov,

Dear friends! We ask you to support Ilya Romanov, Russian anarchist accused of 'terrorism', who has already spent a year in prison. ABC-Moscow included him in the list of anarchist political prisoners.   On 26 October 2013 46-year-old anarchist Ilya Romanov was wounded in the city of Nizhnii Novgorod. The explosion which occurred late at night severely injured his left hand and burned his face. Ilya was taken to hospital where doctors amputated his arm. Romanov explained to the police that he unwarily used a pyrotechnic device.

On Thursday the 28th of November, the Lenin district court of the city of Tyumen upheld the request of the prosecutor of said district in recognizing five articles of the journal Avtonom as “extremist.”

(This is a partial English translation of a program, aired in Dozhd TV channel 17th of August, which is embedded below.)
Center of Counteraction Against Extremism ("E-Center") in the city of Vladimir did not liked amateur movie "Russian anti-racist skinheads", and they opened a criminal case against makers of the film. According to them, film incited hatred against "social group of skinheads and nationalists".

Not so long ago, in Rostock, in the north-east of Germany, the anti-fascist
festival "Riot in My Heart" took place.

After the performance, band members from Los Fastidios(Verona, Italy)
and the Stage Bottles (Frankfurt, Germany)as well as one of the
organizers of the festival made a video message in solidarity with their
comrades in Russia.

This is a reminder for the Days of International Action in solidarity with
Russian Antifascists which have been repressed by authorities, to take
place from the 10th to the 17th of June.

Various Moscow antifascists including Alexey Olesinov and Alexey Sutuga are
being accused of having participated in a fight, which took place on the
17th of December 2011, at the club "Vozdukh." They are being charged with
Article 213 Part 2 of the Criminal Code ("hooliganism").

They are also being charged with having caused bodily injury to a resident
of Moscow on the 4th of December 2011. Neither defendant accepts this
chargers and are pleading innocent.

Pavel Krivonosov, Dmitriy Kolesov and Oleg Gembaruk (Nizhniy Novgorod
"RASH-Antifa" case ) are being charged with article 213 (hooliganism), 282.1
(participation in an extremist community), 115 (causing bodily harm) and 116
(assault). They are accused of having participated in an extremist
community, ostensibly created for the attack on neo-nazis (or "skinheads,
football fans," as the investigators have called them) to incite hatred
against a social group of "bourgeois-backed Citizens."

9th of March there was a benefit evening in Lund, a student city located in Southern Sweden. One of the topics of the event was repressions against antifascists from Nizhniy Novgorod.

13th of February, a known Moscow anti-fascist Alexey Olesinov was arrested in St. Petersburg with charges of “hooliganism”, related to incident in Moscow club “Vozdukh” 17th of December.

We call on concerned academics around the world to sign the petition to Administration of Tyumen State University and Russian higher education authorities.

Andrey Kutuzov is a Russian anarchist academic who has been teaching linguistics at Tyumen State University (Western Siberia). He is also an activist and participant in grassroots movements. 7 September 2011 Andrey was dismissed by Gennady Chebotarev, the rector of the University. We believe that Andrey was dismissed because of pressure from the local authorities on the university administration. The official reason for the dismissal was declared “committing an immoral deed” referring to the recent case of repression for his political activities.

At the present moment by The Anti-Extremist Center of GUVD (General Directorate of Internal Affairs - SM) in Nizhniy Novgorod Region detectives a criminal case is fabricating against Artem Bystrov, who was arrested on April 26,2011. He is incriminated the article № 213 part 2 (hooliganism committed by a group of persons on preliminary arrangement by hatred or hostility toward a particular social group). Two of suspects yet couldn't be arrested. It is worth noting that victim itself — a nationalist D.Redkin, doesn't have any claims to people arrested on April 26 and refuses to take part in confrontments. The case was filed seven months after the accident. It was filed by pressure at the victim and the witness. The investigation is proceeded with gross violations and falsification of evidence. For example during the rummages the membership cards of non-existing organisation “RASH-Antifa” with photos and serial numbers, evidently made by Center “E”(The Anti-Extremist Center - SM) detectives, were planted in to the suspects' homes. <

28th of April, hip-hop musician Andrei "KUBA" Kravchenko was kidnapped by police in Moscow in university, where he was about to pass his final exams in faculty of PR. He was handcuffed and taken to police station of "Bogorodskoe", from where he was further sent by airplane to his hometown, distant city of Chita in Siberia.
30th of April, Andrey was interrogated in criminal case against local anti-fascist activists, and eventually released court pending. Case dates back to September of 2010, when a group of local Nazis, lead by Semen Murzin, claimed to local polcie that they had been beaten up by anti-fascists. Five anti-fascist were charged with "hooliganism", but eventually three of them have been requalified from suspects to witnesses.

Perm left today organized a picket near the building of regional prosecutor's office for civil and political activists who are persecuted for political reasons, including - "Khimki hostages Alexei Gaskarova, Maxim and Dennis Solopova.

April 6 at 18:00 at the building edge prosecutors Permian left picketed against political repression in Russia today in the All-Russian day of united action to defend the anarchists Alexei Gaskarova, Maxim and Dennis Solopova accused of organizing the demolition of the city administration Khimki, in response to repression against defenders Khimki forest on July 28 last year.

April 1, Irkutsk anarchists held a rally to support their comrades from other cities who are persecuted for their beliefs and action. The anarchists took to the picket with the slogan "I looked at this banner? Now you - an extremist!

Picket in support of Andrei Kutuzov held on March 24 Tyumen "Autonomous Action". Per share, in the past on the area of ​​unity and harmony, it's about fifteen people, not counting journalists. The activists unfurled a banner "Free Andrew Kutuzov" and "No to political repression!".

At the last names were Alexei Gaskarova, Maxim Solopova, Tatiana Stetsury, Hope Nizovkinoy and others, which the government now pursues politically motivated.

At night, February 5, Irkutsk anarchists posters adorned the walls of the city known "extremists" from which to watch passers-by "father of Russian literature - Pushkin, Gorky, Tolstoy, Mayakovsky - and in a very unambiguous terms to express their thoughts.