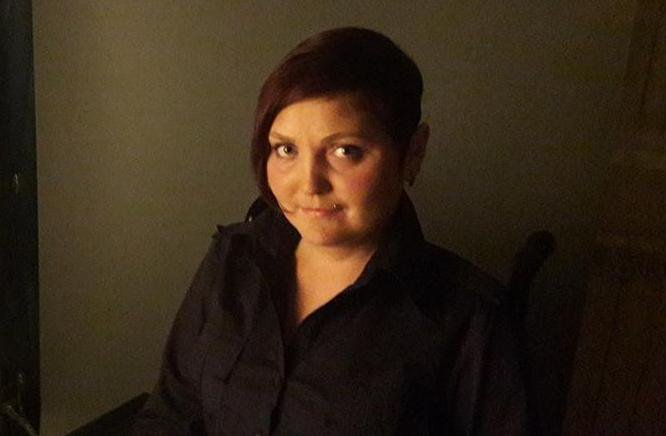 Elena Nadezhkina took part in different animal defence-, eco- and social actions, international solidarity actions and many others. Until 2009 she volunteered for several years: rescued dogs and cats and found homes for them.  Moreover, Elena participated in ecological projects: campaign against deforestation, campaign for political prisoners of the Khimki forest defence and other social actions.

For several years Elena has been suffering from serious illness: she has got a severe genetic autoimmune disease that keeps progressing. Since the autumn of 2015 Elena cannot walk, at home she uses crutches. Outside Elena moves on a wheelchair but with someone’s help as Russian urban areas and transport are not adjusted for people with special needs. That is why she leaves her place not more often than once a week.

Despite everything Lena doesn’t give up and continues not only to fight with the illness but also to help others.
She needs medical checkup, fresh view from different specialists and new examinations as the diagnosis in previous medical institution was doubtful. Also two operations on joints are needed, two of them will give Elena an opportunity to walk.

Free medical treatment did not help. Lena was hospitalized for several times and underwent treatment in Moscow and asked for additional examination, but was refused. At the beginning of June Elena’s friends started fund-raising. Thanks to that Elena could get some examinations and be hospitalized in a good Moscow clinic.

Elena has got a serious immune system failure: on the one hand – immunodeficiency (that leads to inability of the organism to fight with infections), on the other hand – aggressive behaviour of the immune system towards the healthy cells that leads to autoimmune diseases (ankylosing [rheumatoid] spondylitis). In this case the immune system attacks (=destroy) joints. Recently Elena has been told that she has a number of other diseases. One of them is osteomalacia. This is a problem of intraosteal system, that is why it is strongly recommended not to walk even with crutches and avoid physical load before the operation.

At the moment Elena feels better, but unfortunately her condition is considered to be poor and she has a lot of procedures ahead. She was prescribed a number of supporting medicine which she takes at home.
Now because of the illness her organism is not able to resist, that is why strong (basic) medicine for curing autoimmune disease is dangerous – that may lead to serious side effects. For some period (2 or 3 months weekly) she will get medicine named Pentaglobin (Human normal immunoglobuline for IV-injections Fluid) to support her organism. This medicine costs really much: 11 000 rubles for a bottle.

In November Lena is going to be hospitalized at the same clinic for the period of 2 weeks. After that, if there are no complications, she will be operated twice on both legs.   A number of factors has influenced the general condition and doctors did not pay attention to them – they were not trying to find the reasons. Unfortunately it is extremely difficult to stop autoimmune process, but anyway it is necessary to do everything that is possible.

Now we are looking for variants of performing operations in Russia. Because of the complexity of the case, not every specialist can perform it in a qualitative way.

We have contacted the private clinic in Riga. Two operations can be performed there at the same time. In Russia they perform these operations separately on each joint with 6 months-break (in better case).

Lena has already consulted clinic “Orto” in Riga where the cost of operation is 13200 euro. It includes preoperative examination, prostheses, an operation itself, a comfortable ward, feeding and rehabilitation during 18 days.

Another important item that is unachievable yet is the check-up in a good hospital abroad. The practice shows that even in Moscow there are different approaches to this disease. That is why it is necessary to look for different opinions and ways of treatment.

After the discharging from the hospital, Lena will get only supporting therapy. Much money and efforts are needed for the search of clinics and treatment variants. We have no information about conditions and clinics yet. Maybe you know something about clinics and new technology of curing this disease.