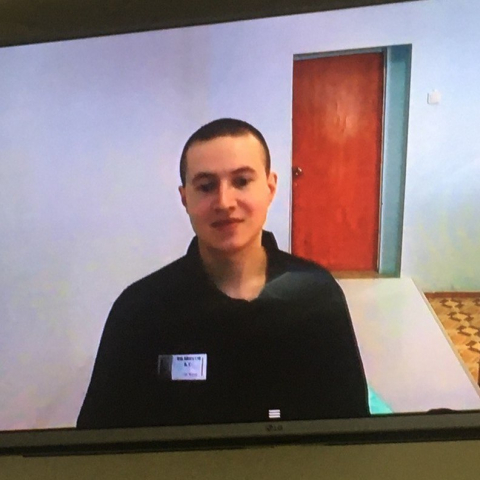 Rupression reports that 16 August, the Sixth court of appeal in Samara examined the complaint of Orenburg’s Colony No. 1 on the decision of Orenburg’s regional court, which declared illegal Victor’s appointment as “malicious violator”, also his transfer to a hi-security prison (this was happening during autumn 2021). The court of appeal rejected the complaint, sealing that way Victor’s victory.

Thanks to that victory, the colony withdrew its application over Filinkov’s transfer to prison. Apart from that, the illegal appointment of the status “malicious” in October 2021 has led to the violation of his rights due to the disciplinary penalties it entailed. They are now also appealed in court, while some have already been canceled by the court.

In particular, on August 18 Orenburg regional court canceled the penalty of one month in EPKT (Unified Cell-Type Facility), appointed to victor on November 2021. Then, on his birthday and on 10th day of hunger strike, officers of the Penal Colony No.1 planted a razor blade, for which he received one month in EPKT in Novotroitsk. As a result, from November 2021 to January 2022 Filinkov was in transfers and held in the isolation ward of Novotroitsk’s Penal Colony No. 5.

Examining Victor’s case, the Central district court didn’t found any violations of the law. But after that, on another hearing Filinkov managed the removal of “malicious violator” status, which means that they didn’t had the right to place him in EPKT. At the same time, the judges raised the question why the Colony destroyed the razor and the blade, without investigating how could Victor remove the blade from the razor and not damaging it - that way, making it impossible to investigate in court.

According to his support group, all those aforementioned penalties, demonstrate colony administrations’ bias towards Victor Filinkov, are gross and unlawful violations of political prisoner’s rights, with the purpose to make his life in prison as difficult as possible. For the year spent in colony No. 1, Victor didn’t have neither one phone call, short or long visitations, received only three parcels, and only 4 days he was among the general prison population. Meanwhile, 279 days of the year he spent in isolation wards, 209 of which -  in solitary confinement.

Victor Filinkov and his lawyers Vitaly Cherkasov and Evgenia Kylakova will continue to seek the restoration of his rights, since violations continue: since 15th of August Victor is serving a month in PKT (Cell-type premises) .

As Victor mentioned earlier: “The repressive machine became mired. But it didn’t stop. Its wheel came off, but now they will quickly screw it back”. Colony’s administration has already appointed the political prisoner as “malicious violator” and obviously prepares documents for his new transfer to prison.

You can support Victor Filinkov with letters and money:

Currently, we work on the recovery of libertarian and anarchist movement in Russia, after a long period of stagnation and repressions and we need your help to improve our site.

Join our campaign to raise money on Firefund!