War against war! Statement of leftists and anarchists on the confrontation in Ukraine 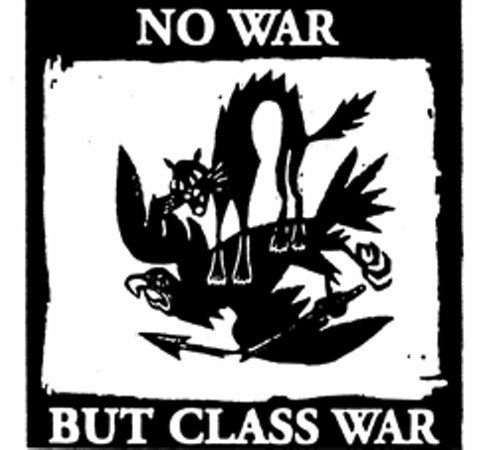 In the ongoing conflict, we support neither Ukrainian government nor pro-Russian factions that established their authority on the portion of Luhansk and Donetsk oblasts. The working class (i.e. everyone who has neither power nor capital) is equally alien both to the concept of ​​unitary Ukraine and to the ideas of ​​”federalization” or creation of new states — these are merely the games of politicians, drawing blood from ordinary people. We, the left and the anarchists, should primarily adhere to the needs of the working class in the war-torn regions of Ukraine, protect their rights and freedoms.

Against LPR and DPR!

Donetsk and Luhansk “people’s republics” are a collection of warring right-wing juntas. Rights and freedoms, which are granted to the rest of Ukraine, are not available in the territories under their control. Public manifestation of political dissent is not possible there; worker rights activists who criticized DPR were kidnapped and tortured. Upon preservation of these regimes the working class will be completely deprived of any opportunity to defend their legal rights. The only possible form of the “left” activity in DPR and LPR is the ritual worship of Soviet symbols, which has nothing to do with the workers’ interests.

The reactionary regimes of DPR and LPR are not interested in peaceful solution, they aim at escalating the conflict even further, which is confirmed by the promises of their leaders to “get to Kharkov”, “to Kiev” and “to Lviv”.

Against the Ukrainian government!

Ukrainian authorities profit from war contracts, send war reservists and untrained conscripts to to the frontline of the civil war, and attempt to use the protracted military conflict to strengthen their positions. Contrary to the forced rhetorics of the unity between the government and people, we must resist all attempts to curtail social guarantees, political rights and freedoms, all manifestations of police and military violence, all the incitement of nationalist and religious prejudice among soldiers and common people. For the ruling class, war is the opportunity of a crackdown in political and social spheres. In struggle against the aggression of Putin’s regime and his satellites, Ukrainians should not neglect the danger of a “Putin” who can emerge in their own country.

After their victory over the “separatists”, whose position is doomed without the external military support, the strengthened Kiev regime will once again become a major threat to the working class. If the oppressed unite with the ruling class under the patriotic banners, the crackdown on human rights and freedoms, which was to be avoided by the Maidan, is inevitable under the new government. Parliament is comprised of the representatives of conservative and far-right parties (“Batkivshyna”, “Svoboda”), which had repeatedly sponsored obscurantist bills – in particular, the restitution of death penalty, restriction of reproductive rights, preventive arrests on political motives; the charters of these parties contain appeals to ban political strikes. In many of the initiatives they mimic such of the Putin’s regime, of the Party of Regions or of the Communist Party. Despite their plummeting ratings, such rhetorics are perceived as a legitimate part of the political field.

Against fascists on both sides of the frontline!

We unhesitatingly oppose the legitimization of ultra-nationalist and criminal groups as members of the “anti-terrorist operation”. However, we should note that among those fighting on the other side are the volunteers from European fascist organizations and the ultra-reactionaries from Russia, and pro-Kremlin propaganda only portrays them as “anti-fascist warriors”.

Against war incitement under the guise of pacifism!

We are equally disgusted by saber rattling and cheering the killing of enemies, on the one side, and by pseudo-pacifist speculations of the people directly responsible for the escalation of violence, on the other. Pacifism is neither compatible with the backing of the “New Russia” regimes or expressing any kind of sympathy towards them, nor with the support of Ukrainian militarism.

Against lies and propaganda from all sides!

Information space and the media have become a genuine battlefield, the people of Ukraine and Russia are being fed opposite in content but equally spurious propaganda that strengthens militancy on both sides of the conflict and sets workers on against other; this allows governments to channel social discontent into a safe direction. Therefore, it is important not to follow the crowd, which is pleased to receive the news it wants to hear, but to keep a sober mind and stay true to our principles. Only time will help to reconstruct the events truthfully.

For the development of the labor movement!

The working class in Ukraine is still in its infancy and is does not take part in the conflict as a subject. We need to formulate and defend the social agenda and help the development of organizations that express the interests of workers. Only a strong labor movement that realizes its interests will be able to establish peace in Ukraine.

We oppose involuntary military service, and demand to end the conscription and release all soldiers who do not want to fight.

We express our support and solidarity with the workers’ and trade union initiatives that fight for their labor rights; we are ready to actively support those who are struggling against DPR and LPR from the class standpoint. They are in a much more serious danger today than activists from Central and Western Ukraine.

No war but the class war!